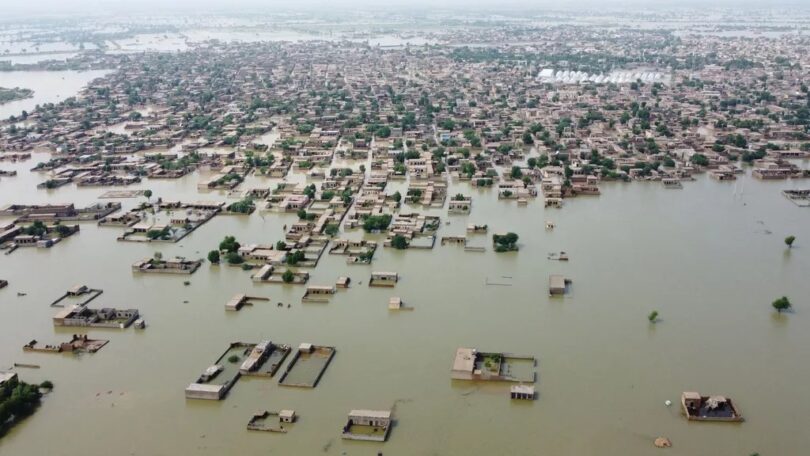 The ties between human-caused climate change and extreme weather events became even more obvious in 2022 — and, for the first time, played a starring role in climate diplomacy.

Why it matters: The deadly, widespread flooding in Pakistan in late summer helped galvanize international support for a way to compensate poor countries for the disproportionate share of climate damage they are bearing.

The big picture: The world saw a litany of extreme weather and climate events in 2022, many of which scientists concluded were made more likely and/or severe due to climate change.

Europe was ravaged by deadly heat waves and wildfires.

Hurricane Ian was especially deadly, and went on a turbocharged boost of rapid intensification as it approached the vulnerable coast of southwest Florida in September.

Parts of Australia were hit by multiple rounds of flooding in 2022, consistent with both a La Niña event in the tropical Pacific Ocean and climate change trends in heavy precipitation events.

Extraordinary heat and drought struck China for more than two months over the summer, with more than 200 all-time high temperature records set.

And a devastating drought and famine continues to grip the Horn of Africa, which has ties to climate change, as well as climate cycles in the Pacific and Indian Oceans.

Zoom in: Any one of these events could have spurred policy changes, but it was the flooding in Pakistan that gave diplomats from developing nations the moral high ground needed to secure a deal at the COP27 climate talks on the fraught issue of “loss and damage.”

Loss and damage is UN-speak for the impacts of climate change in less developed countries, which have contributed comparably little to causing the problem yet are suffering from some of the worst consequences.

Ever since the Rio Earth Summit in 1992, the UN climate talks have featured periodic dustups on this topic, with little progress made until COP27 in Egypt in the fall.

There, diplomats from industrialized countries including the U.S., agreed to a two-year process of discussions to establish a fund that would compensate developing nations for the climate damage that they cannot adapt to.

Between the lines: The disaster in Pakistan likely had climate change ties, according to scientific investigations of the event.

For example, a study published in the wake of the disaster found that human-caused global warming likely increased two-month rainfall amounts by up to 50%. Climate change may have increased five-day rainfall amounts in just two of the hardest-hit provinces by up to 75%, the study found.

The intrigue: Just as each year is not expected to be the warmest year on record, due to the interaction between global warming and natural climate variability, not every year will set records for the worst climate disasters, either.

For example, even though 2022 was destructive in many parts of the world, the West Coast of the U.S. enjoyed a respite from the recent trend of record wildfires.

What they’re saying: “This dystopia is on our doorstep; it’s going to be next in their country,” said Pakistan’s climate minister, Sherry Rehman, in a September interview with Time, speaking of industrialized nations. “If you’re not understanding that it’s right here, right now, or that actions need to be taken post-haste, then you’re really sleepwalking into annihilation.”