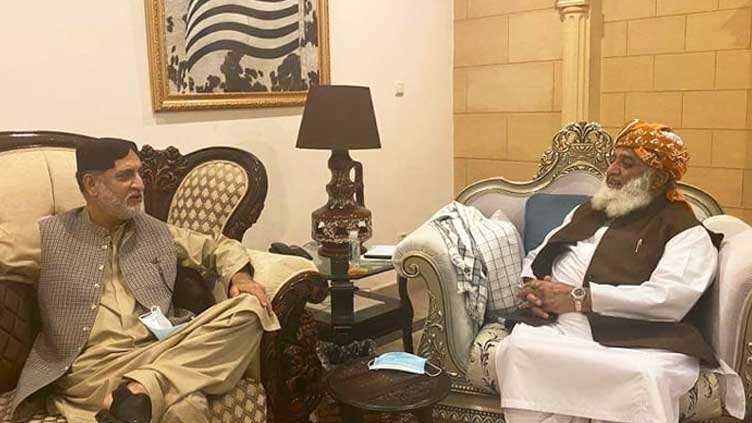 ISLAMABAD (NNI): Pakistan Democratic Movement (PDM) chairman and Jamiat Ulema-e-Islam-Fazl (JUI-F) chief Maulana Fazlur Rehman and Balochistan National Party (BNP) chief Sardar Akhtar Mengal on Tuesday expressed reservations for not taking them in confidence over legislation regarding Reko Diq.
According to sources, the PDM chairman met BNP chief in which matters pertaining to overall political situation of the country and Balochistan came under discussion.
In this regard, sources said that both leaders while expressing concern for not being taken into confidence over Reko Diq legislation, agreed on adopting joint political strategy. Both the leaders called the Foreign Investment Protection and Promotion Bill against the 18th Amendment.
Earlier today, the BNP-M chief, a key ally of the Centre’s ruling alliance, was reportedly displeased with the government over recent legislation in connection with the Reko Diq project. Sources claimed that Mr Mengal, who was considering parting ways with the ruling coalition, had summoned a meeting of BNP-M’s core committee to discuss the recent developments and future plan of action.
The former CM Balochistan had also refused to support the Foreign Investment (Promotion and Protection) Bill, 2022 in the lower house of the parliament. However, the ruling alliance, while apparently bulldozing the concerns raised by the allies, managed to take the parliament’s nod on the bill.
Meanwhile, Balochistan Chief Minister Mir Abdul Quddus Bizenjo on Tuesday said no one would be allowed to politicise the Reko Diq project, days after the Supreme Court declared a new deal with a foreign company legal.
Mr Bizenjo in a media talk made it clear that the provincial taxes on the copper and gold mine project would go to Balochistan. He vowed not to give in the powers granted to the province after the 18th amendment to the constitution. Last week, the apex court declared a new deal between a Canadian firm and the Pakistani government on the Reko Diq project legal.
A five-member bench of the apex court, headed by Chief Justice of Pakistan Justice Umar Ata Bandial, and comprising Justice Ijazul Ahsan, Justice Muneeb Akhtar, Justice Yahya Afridi and Justice Jamal Khan Mandokhel shared their opinion on a reference sent by President Arif Alvi. Canadian company Barrick Gold, which ended a long-standing dispute with Pakistan in March last to strike a new agreement, earlier asked the federal government to get clearance from parliament and the country’s top court to make its investment in the project save.
In its short verdict, the apex court observed that the government had signed the agreement after taking the Balochistan Assembly into confidence and consulting experts.