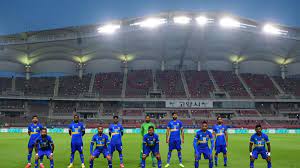 COLOMBO (Agencies): Football’s governing body FIFA has suspended Sri Lanka’s national federation, it said Sunday, a month after issuing it with a “red notice” over governance issues.
That warning came after the Ministry of Sports introduced a raft of regulations that reportedly compromised the autonomy and independence of national sports bodies, including the Football Federation of Sri Lanka (FFSL).
This month the FFSL held an election, which reportedly fell short of standards agreed upon with FIFA and the Asian Football Confederation (AFC), in which an ally of the sports minister became chair. In a letter Sunday, FIFA said the FFSL was suspended “until further notice”.
The suspension prevents Sri Lanka — which is in the midst of a major economic crisis, blamed partly on corruption — from taking part in international competitions.
Sri Lanka’s men’s team are ranked 207th in the world, and the women’s 155th.