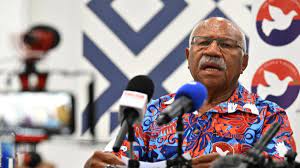 SUVA (AFP): Fiji’s opposition leader said the military had rebuffed his pleas to intervene in the country’s contested election Friday, as his efforts to halt the vote count faltered.

Opposition leader Sitiveni Rabuka is demanding the count be stopped and an independent audit take place, saying the process had been “clouded with mysterious glitches and stoppages.”

Rabuka, a former coup leader and prime minister, wrote to military commander Jone Kalouniwai, asking the military to step in.

The answer was “no”, Rabuka said. “He will not be drawn into it.”

Under a constitution drawn up in 2013 after a period of political turmoil, Fiji’s military has the “overall” responsibility for maintaining stability in the country.

The election has been a high-stakes battle between political enemies Rabuka and incumbent Frank Bainimarama, who seized power in a putsch 16 years ago.

While the vote is seen as a test of Fiji’s often-fragile democracy, there is a regional significance as well — Bainimarama has been close to China, while Rabuka is likely to distance himself from Beijing.

The early count was derailed by late-night glitches that hid the tally from public view for four hours, and briefly showed obscure parties polling well above the main candidates.

Six opposition parties and Fiji’s biggest Christian church have since questioned the integrity of the ongoing count.

Rabuka — nicknamed “Rambo” after leading two coups in 1987 — used his Friday press conference to outline what he said were a series of further irregularities in vote counting.

He said some villages appeared to have cast more ballots than there were registered voters.

“We no longer have faith in the integrity of the supervisor of elections and his refusal to explain the so-called glitches in the app on Wednesday night,” he said.

Four Fijian prime ministers have been toppled by coups in the past 35 years.

Nearly 100 members of the Multinational Observer Group are in Fiji to oversee vote counting.

They have so far avoided weighing in on the situation, but are expected to present their preliminary findings later on Friday.

“I have nothing to hide,” he said, while refusing to halt the count.

Bainimarama, a former Navy commodore, seized power through a military coup in 2006, and is one of the Pacific’s longest-serving leaders.