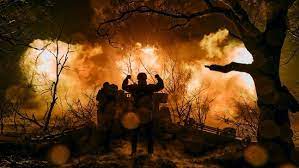 PARIS (Reuters): Ten people, including five children aged 3 to 15 years, were killed after a fire broke out on Friday morning at a residential building in Vaulx-en-Velin, near the French city of Lyon, Interior Minister Gerald Darmanin said.

Darmanin said the cause of the fire was not known at this stage.

“There are several scenarios and a probe will be opened,” he said, adding he was in touch with President Emmanuel Macron over the incident.

Around 180 firefighters were at the site. The fire was now extinguished, Darmanin said, adding he was heading to the site.

The fire occurred in the early hours of Friday morning at a seven-story residential building. A security cordon has been set up at the site, the authority of the Rhone area said.