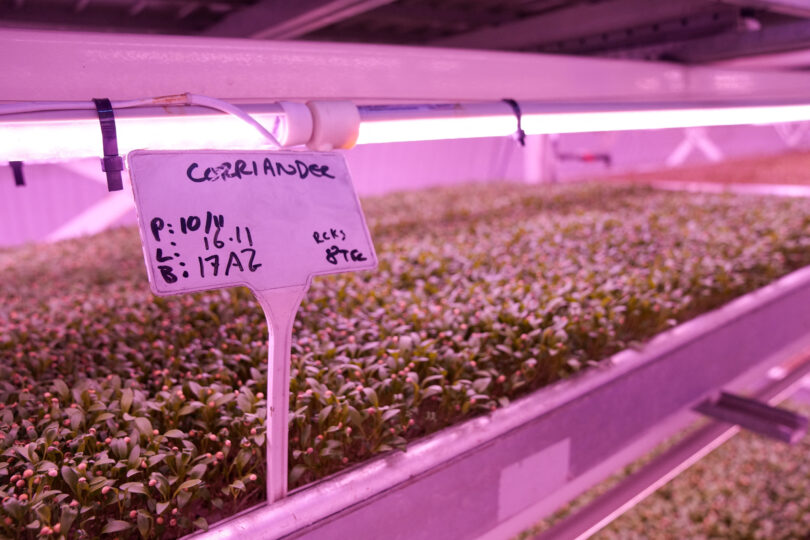 LONDON (Reuters): In an underground World War Two air raid shelter where London tube trains can be heard rattling overhead, aromatic coriander leaves tilt towards the pink glow of LED bulbs – a vision of how farms could look in the future.

Zero Carbon Farms grows herbs and salads in Clapham, south London, a densely populated area with no room for conventional agriculture. But 30 metres below ground there is a kilometre of tunnels, and technology has made farming here a reality.

Seven years after its first harvest, the company will soon double its growing space, responding to strong demand for its peashoots, rocket and watercress from major British retailers like Marks & Spencer (MKS.L) and local restaurants.

Buyers like the freshness of the produce, which can make it onto a diner’s plate within two hours of harvesting, as well as its arrival into the city without racking up emissions by air or from a long journey.

“The future is very, very bright for this industry and I think that what really is going to be the fundamental pivot point is the right application of technology,” said the farm’s head grower Tommaso Vermeir.

Vertical farming, the name given to the production of crops in a series of stacked levels, often in a controlled environment, is a fast-growing industry with billions of dollars being pumped into projects across the globe.

It is seen as part of the solution to the food security challenge posed by population expansion at a time when climate change and geopolitics threaten supply.

But growing by artificial light is more energy intensive than conventional farming and the high costs of production have been a challenge for vertical farms across the world.

“What makes this industry so exciting and challenging is that no one’s quite cracked it,” said Zero Carbon Farm’s business development director Olivia O’Brien.

The farm’s subterranean location provides inbuilt insulation from the cold. The company has what it calls “virtual private wiring” bringing in energy from renewable sources.

Energy prices have soared this year but Vermeir said an arrangement with supplier Octopus Energy’s business unit gave it a better price than if it were taking energy from the grid like other customers.

Zero Carbon Farms reckons it has an edge over the dozens of other vertical farm projects springing up in Britain because of its sustainable credentials and its years of experience, which its hopes will translate into higher yields from the new farm space.

Seeds are sowed on carpet off cuts and although there is no soil on this farm, workers do wear a uniform which includes the classic farming accessory of Wellington boots.

Slicing leaves from their stems with a huge knife, farm supervisor Riley Anderson, 27, one of the company’s 35 employees, said this wasn’t a typical London job.

“I didn’t want to work in an office.