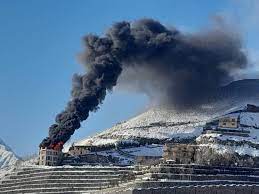 Panjshir (Monitoring Desk): Local officials in Panjshir province reported that former Minister of Justice of the Islamic Republic of Afghanistan, Fazal Ahmad Manavi’s house in the Rukha district of this province had caught fire earlier today.
Mawlana Nasrullah Malikzada, head of the information and culture department of Panjshir province, told Khaama Press News Agency that a fire broke out at Fazl Ahmad Manavi’s house in “Piyawasht” village in Rukha district of this province in the early hours of Friday.
Malikzada stated that the fire was caused by an electric issue on the fifth floor of that house. He added that the fire had been contained after the firefighter team arrived on the scene. No casualties were reported, however, major financial damages were caused to the building.
local sources in Panjshir say that a huge library accommodated some 5,000 books of different disciplines in the building was completely burnt to ashes. Sources also added that Fazal Ahmad Manavi, the owner of this building held a reading and cultural programs at this library from time to time.
Fazal Ahmad Manavi, the exiled former Afghan Minister and politician originally from Panjshir province immediately reacted to the incident and described it as “intentional” and a very cowardly move referencing the enemies of Afghanistan.
“The enemy of humanity has burnt my library in Panjshir which accommodated thousands of books from different disciplines including, Islam, religion, history, academia, and literature –dating back centuries. Afghanistan is our shared homeland, and unfortunately, our intellectual and material gains are gradually burning in fire,” Manavi said on Twitter.
The incident was accompanied by widespread condemnations in Afghanistan and beyond, calling the ac extremely cowardly and in contradiction with Islamic principles. However, the Islamic Emirate authorities have not yet commented in this regard.