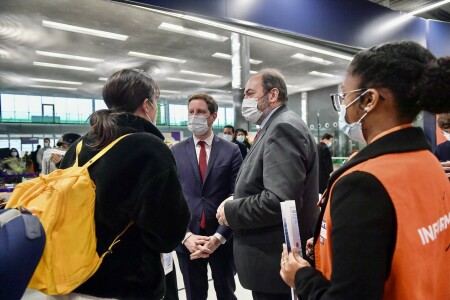 PARIS (AFP): France on Sunday began testing passengers arriving from China in order to track potential Covid variants, Health Minister Francois Braun said.
“This control on arrival is not a control to prevent citizens entering our territory but a more scientific control which will allow us very precisely to check different variants,” Braun said at Charles de Gaulle airport, north of Paris.
“These are essentially Omicron variants currently in China,” said Braun, adding there will be “a discussion at the European level in the week to harmonise this model” of testing.
As of Sunday, visitors from China must wear a mask and be prepared to submit to a test on arrival, which will be done at random.
Then from Thursday, travellers will also have to present a negative PCR or antigen test undertaken less than 48 hours before their flight.
France joins other states, including the United Kingdom, Italy, and the United States, in testing arrivals from China, four weeks after Beijing scrapped its “zero-Covid” containment policy of lockdowns and mass testing.
But, three years after the coronavirus first emerged in the city of Wuhan, the country is experiencing a surge in Covid cases. The wave of infections is overwhelming hospitals and crematoriums, notably with older and sick patients, many of whom have not been fully vaccinated. There have also been questions about the accuracy of Chinese case data reporting.
French minister delegate for transport, Clement Beaune, said there were currently six flights to France per week from mainland China and four from Hong Kong. Most passengers from China to France only transit through Charles de Gaulle.
Of 300 passengers who disembarked a flight to the French capital on Sunday, around 60 entered the country and all took a PCR test. French officials at the airport also took their details in case of a positive test, which would require seven days of isolation.