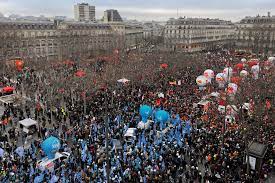 The French, outraged by the pension reform, decl-ared a nationwide strike. People are determined. But the government is not going to give up either. About how events are developing – in the material of RIA Novosti.
Reform on the sly
The pension system in France is very confusing with over forty options for different professions.
Emmanuel Macron explained: the reform is necessary precisely to simplify the system. Unification minimizes red tape, reduces the swollen bureaucratic apparatus.
However, the retirement age and seniority are rising.
Therefore, Macron’s “o-ptimization” plans were not popular from the very beg-inning. The president, co-unting on a second term, tr-ied to smooth things over and did not force the process.
The victory in last year’s elections, obviously, untied the hands of the authorities. And on December 31, the head of state announced the launch of the reform. Ten days later, the government of Prime Minister Elizabeth Bourne announced its key provisions. And this caused public outrage.
Work longer, earn less
First, the retirement age is increased by two years to 64 years.
Secondly, for a full, without deductions, pension, 43 years of service are required (so far 42). That is, it is necessary to work out – officially and without interruptions – 21 years.
Macron and Born tried to reassure the population: all this is not right now. The length of service will be increased by 2027, the retirement age by 2030.
In addition, they will raise the minimum pension to 1200 euros per month (now – 1100).
But the French did not calm down. The eight largest trade unions have agreed to a nationwide strike and large-scale protests.
Three round resistance
A trial, daily strike took place on 19 January. In the morning, transport communication was virtually paralyzed, many teachers in schools and higher educational institutions did not come to work. So did the oilmen. Doctors have been on strike since the end of December.
The French Democratic Labor Confederation CFDT – the national trade union center – said the protests were a success. And this is just the beginning.
A 48-hour strike was planned for January 26-27, and a three-day strike for February 6-8, when the reform bill goes to parliament. Some trade unions want to organize actions on January 31 as well.
“The mandate received by Laurent Berger (head of the CFDT. — Ed.) at the last confederate congress allows him to oppose the government initiative without any negotiations. relations and trade unions.
No more “yellow vests”
Unlike in 2018, when the French took to the streets in disparate factions, now the CFDT is clearly claiming to be a unifying force.
The authorities severely suppressed the movement of “yellow vests” with the use of special equipment. Outcasts who aggressively clashed with the police discredited the protests. Therefore, the trade unions are trying to prevent any association with the vests.
This, however, does not guarantee that the authorities will not escalate again. The government, of course, understands that the demonstrators are on the side of the polls, according to which 68% of the French are unambiguously against the reform. “There is a right to strike, there is a right to demonstrate,” Born admits.
At the same time, Macron has a reliable force resource. After all, if for ordinary Frenchmen the experience rises to 43 years, then for the police there will still be less than 30. Therefore, they are in no hurry to join the protesters. And on January 19, some already used tear gas. About 40 people were detained.
Millions protest and cautious concessions
It is difficult to say how many people are ready to go on strike, writes Le Monde. If the government behaves with restraint, the protesters will grow bolder. But tough measures will also play against Macron.
At least a million people even joined the “trial” actions, which was also confirmed by the Ministry of Internal Affairs.
Laurent Berger expects the mass character to increase by February. His CGT colleague Philippe Martinez is hoping for “millions” of demonstrators. At least 200 “collection points” have been opened in the country – this also compares favorably with the current organized actions from the spontaneous events of 2018 and 2019.
The government has already submitted the second version of the pension reform bill to the State Council.
The text, which local journalists got acquainted with, is twice as long as the first one (20 pages). The appendices, in particular, contain detailed information on the financial balances of the various welfare departments. But more importantly, the document notes for the first time that the cost of innovation at the moment will be greater than the potential savings.
And although Macron, going to the height of the protests with a visit to Barcelona, assured that the government would continue the pension reform, new notes were heard in his rhetoric.
According to the president, the changes should be accompanied by a “dialogue” and be, above all, “fair and responsible.”