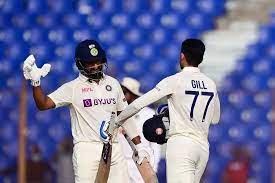 CHITTAGONG (AFP): Shubman Gill and Cheteshwar Pujara each struck a century as India took control of the first Test against Bangladesh in Chittagong on Friday.

The visitors declared their second innings on 258-2 in the third session of the third day to set the home side a daunting 513-run target.

Bangladesh were all out for 150 runs in their first innings, leaving India the overwhelming favourites to secure victory.

“Obviously we will see a result in this match. Either we will win or they will win,” said Bangladesh all-rounder Mehidy Hasan.

“But our batsmen need to take responsibility,” he said. “The wicket is still good. Execution is very important.”

India’s skipper KL Rahul called back his batsmen once Pujara brought up his 19th Test hundred with a four off Taijul Islam soon after their lead surpassed the 500-run mark.

Pujara, who scored 90 in India’s first innings total of 404, was unbeaten on 102 after smashing 13 fours, with former skipper Virat Kohli 19 not out at the other end.

Gill earlier completed his maiden Test century before he was dismissed by Mehidy for 110.

Gill, who hit 10 fours and three sixes, shared a 113-run partnership for the second wicket with Pujara, after Rahul holed out to Taijul Islam at fine leg off Khaled Ahmed on 23.

Bangladesh survived the day unscathed in their second innings, reaching 42-0 at stumps to leave them still needing another 471 runs to pull off the unlikeliest of victories.

Najmul Hossain and debutant Zakir Hasan will resume on 25 and 17 respectively on the fourth day.

India earlier bowled Bangladesh out cheaply to take a sizable 254-run first innings lead but decided not to enforce the follow-on.

Left-arm spinner Kuldeep Yadav led India’s bowling attack with career-best figures of 5-40, his third five-wicket haul in Tests, and the visitors needed barely an hour to mop up the Bangladesh tail after the hosts resumed on 133-8.

Kuldeep last played a first-class match in September for India A and admitted he was “a bit nervous” coming back to the red-ball game.

“Generally, it’s not a problem for me to switch from white ball to red ball,” he said.

Axar Patel took the last Bangladesh wicket of Mehidy, who offered some late resistance before being dismissed for 25 in the 12th over of the morning, while fast bowler Mohammed Siraj took 3-20.

Mushfiqur Rahim top-scored for the deflated hosts with 28 before he became one of Kuldeep’s victims, out lbw.