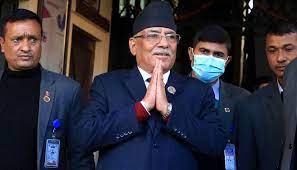 According to the media, Nepal’s newly elected leader intends to balance ties with its immediate neighbors China and India for the economic growth of one of the poorest countries in the world. While announcing his government’s manifesto former rebel leader vowed to maintain relationships of equi-proximity with both neighbors, keeping a particualr focus on containing inflation, maintaining foreign reserves, narrowing the trade deficit, and lowering interest rates in the country.

Nepal is one of several South Asian countries that India and China seek to influence to implement their strategy of regional hegemony. India has long considered Hindu-majority Nepal, a natural ally based on their close historical ties and a long open border, while the People’s Republic of China (PRC) considers Kathmandu a crucial ally to deter foreign intervention in Tibet disputed region from the United States and India, as Tibetan exiled leader enjoys full support from New Delhi and Washington. Over the past years, Beijing and New Delhi poured billions of dollars in economic assistance and investment into Nepal’s fragile economy in a bid to consolidate their influence in land locked deomocracy.

Previously, Prime Minister Khadga Prasad Sharma Oli was beleived to be a pro-China ruler and Kathmandu’s ties with Beijing improved significantly during Oli’s regime while New Delhi lost its influence during this period. Presently, a new Sherrif is in town, who intends to create a balance in Nepal’s bilateral relations with two important countries in the region.

Interestingly, the recent General Election returned a hung parliament in Nepal that facilitated the former rebel leader Pushpa Kamal Dahal to become Prime Minister for the third time after leaving his previous coalition and constituting new partnerships with six other political groups including the opposition Communist Unified Marxist-Leninist (UML) party and five smaller political parties. The newly incumbent leader aims at simultaneously enjoying all available options while receiving economic, military, and technical aid from both China and India, bordering the country in the North and South East and west respectively. As regard to bilateral relations with Neptal, both opposing nations had always preached mutually beneficial ties, noninterference in each other internal issues, and no persuasion in foreign relations except cooperation in converging areas of interests however practically New Delhi and Beijing both bullied the landlocked nation multiple times over numerous issues in recent years.

China coaxed Kathmandu to resolve all its woes through grants and loans from Beijing and rely on the potential economic prospects of Xi’s Belt and Road Initiative (BRI) while keeping its border open for Chinese goods while India offers Nepal all possible help and encourages Kathmandu to accept the US-funded MCC joint infrastructure and energy projects that aim at countering Chinese growing influence in South Asian region. Historically, India had enjoyed the utmost influence in Nepal over the past decades whereas unnecessary and recurrent Indian interference in Nepal’s domestic affairs antaganized the Kathmadu’s rulers agaisnt their powerful neighbor, who subequently countered New Delhi’s aggressiveness thorugh Beijing assistance. Although, Khadmundu successfully pushed back New Delhi’s incursion in the past however Chines coericion had increased in recent months over US economic assistance to Nepal that China perceives a part of the US Indo-Pacific strategy agaisnt it.

Presently, Nepal and several other nations had been caught between the tussle of two giants, thus they are not in peace in one or the other way. Realistically, both amity and enmity with influential had always proved to be counterproductive, thus, a disassocation with them might bring peace and harmony for poor nations.