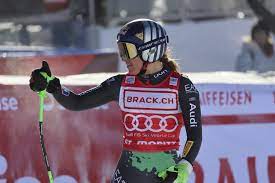 Her left hand she could barely move.

Goggia won the race in impressive style, leading runner-up Ilka Stuhec of Slovenia by 0.43 seconds, a day after breaking two fingers when she hit a gate but still finished second in a downhill on the same Corviglia course.

After Friday’s accident, the two-time Olympic downhill medalist went to Milan to have surgery. The Italian ski team said a metal rod and screws were placed inside her hand to stabilize it and her hand wrapped in a cast.

Still, Goggia returned to the Swiss resort for the second downhill.

With her left hand bandaged and the glove attached to her ski pole with yellow duct tape, Goggia was the ninth starter as she seemed not visibly hampered by the injury.

“When I understood today that I could make it, I think there was no girl who was (as) happy as I was today at the start gate. It was not guaranteed that I could be at the start today,” said Goggia, adding the Italian team even considered not putting her on the start list for Saturday’s race.

Racing under blue skies and sunshine – in contrast to Friday’s race in snowy and foggy conditions – Goggia charged down the 2.5-kilometer course in her usual gutsy style, not holding back in bumpy turns and jumping higher and further than her rivals.

Goggia finished 0.52 seconds ahead of then-leader Kira Weidle of Germany, and waved and blew kisses to the spectators.

Weidle was later bumped into third place by Stuhec, who earned her first podium in nearly four years. The Slovenian had won the 2017 world downhill title on this course.

Goggia’s third win of the season and 20th overall was briefly threatened by Mikaela Shiffrin.

Starting 21st, the overall World Cup leader was a few hundredths faster than Goggia in the first two sections, but Shiffrin took fewer risks than the Italian in the remainder of her run and finished 0.61 behind in fourth.

Shiffrin leads the overall standings with 475 points, 50 clear of Goggia and 109 ahead of Wendy Holdener. The Swiss skier finished 32nd and failed to score World Cup points.

Shiffrin improved two positions from Friday’s result, when she finished one spot behind American teammate Breezy Johnson. On Saturday, Johnson came almost two seconds behind Goggia and finished outside the top 20.