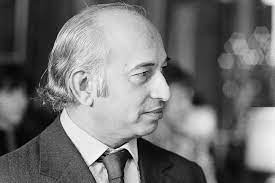 Pakistan is an independent Islamic state. It was named Islamic Republic by ZA Bhutto. Being an Islamic country does not mean you’ve to implement your rules on every individual. Being an Islamic State means freedom of speech, freedom of religion, freedom to vote and all.
Imran Niazi was dismissed previous year. He claimed he’s like ZA Bhutto. For real? How can he claim that? There’s no comparison between these two. Shaheed Bhutto was a light meanwhile Niazi he is a darkness.

Shaheed Bhutto had a style. It has been almost 44 years when he was murdered. Still world is praising him. Zulfikar Ali Bhutto was an angel. He was a messiah to the people of Pakistan who were facing brutality of Gen Zia. ZA Bhutto had a dream. A dream of independent and safe Pakistan. He did a huge effort to make this country a proud country.

Every generation of the Bhutto family has faced an evil ruler. ZA Bhutto vs Dictator Zia, Mohtarma Benazir Bhutto vs Dictator Musharraf, and Chairman Bilawal Bhutto Zardari vs Imran Niazi. It was 1970s when The Zulfikar Ali Bhutto stood for Pakistan against the strict and senseless rules of Gen Zia. Zia made a general rule for rape victims that they have to bring 3 witnesses. This one rule says everything about his mentality. Man, ZA Bhutto was a class. He was a sensible person. He struggled for this country.

He introduced a language in the world of politics. A language of love, sense, respect, manner, and care. He was different among all. His dress sense, his style, the way he walked, the way he talked. He never used any abusive words in his speech. He even respected his enemies. He never interfered in anyone’s personal life. Like who doesn’t know about the affairs of Dictators and Niazi? But that’s there personal life. We are no one to talk about these issues. Our main agenda is politics. Gen Zia tried his best to remove ZA Bhutto from the history. Now we can see who is a history? Bhutto is still alive.

After the murder of ZA Bhutto his daughter Mohtarma Benazir Bhutto took the responsibility of his political party and followed his footstep. A lady in the world of men and many people in opposition tried to drag her character down. Like Nawaz Sharif, Gen Musharraf etc. But she had a grace in her character. All of those accusations were fake. They even tried to drag down the character of Beghum Nusrat Bhutto.

There’s a huge difference between Pakistan People’s Party and other political parties. PPP never talk about someone’s character even if they are characterless. But opposition? Now the battle is between Chairman Bilawal Bhutto Zardari and Imran Niazi. We can see the upbringing of these two. Chairman Bilawal Bhutto Zardari he is a gentleman. He knows how to respect a woman. What to say in public. We can see the grace of President Asif Ali Zardari and Mohtarma Benazir Bhutto’s reflection in his acts.

Niazi always character defame the others. He always disrespect the most senior political members of other parties. He does not even respect a woman. Is this what a political figure should do? This may happen in your cricket but not in politics. You’ve to respect the other political members even if they are your worst enemies.We can see within a few months what Chairman Bilawal Bhutto Zardari did for this country. He’s bringing the brilliant image of Pakistan to the world. What Imran did? Everyone was making fun of us. A politician should be a well mannered and honourable person just like ZA Bhutto, Mohtarma Benazir Bhutto, and Chairman Bilawal Bhutto Zardari.