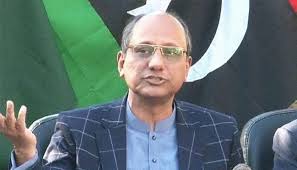 KARACHI: Sindh Labour and Human Resources Minister, Saeed Ghani, has said the Governor is constitutionally empowered to ask the Chief Minister of a province to seek a vote of confidence from the provincial assembly. The Sindh Labour Minister stated this on Wednesday while talking to journalists after inaugurating the 3rd Mini thesis show here at Arts Council.

Ghani predicted that the next chief minister in Punjab would belong to the Opposition political parties. He said that a sitting CM should command the confidence of the majority of members of the provincial assembly. He told media persons that the incumbent CM of Punjab would continue to remain in power till he enjoyed the confidence of the majority members of the house. He said that at present no political party in Punjab Assembly possessed the decisive majority to form the government.

Ghani said the ruling Pakistan Tehreek-e-Insaf in Punjab should have convened the session of the provincial assembly to conduct voting on the no-confidence motion against the CM but this had not been done clearly showing that the ruling political party didn’t have a majority in the house.

To a question, the Sindh Labour Minister said that Karachi didn’t belong to any single linguistic community as the provincial capital belonged to all its inhabitants. He said that Karachi had given the honour to all its residents. He said the residents of Karachi had parted ways with politics of hatred and bias as they wouldn’t follow anymore the elements that were conspiring to ignite again ethnic strife in the city.

Ghani said that innocent people losing their lives in street crime incidents in Karachi was highly tragic. He told media persons that Sindh Chief Minister sought reports from the police high command on a daily basis to personally monitor the situation of street crimes. He said that it was the responsibility of the government to tackle the situation of street crimes. He told media persons that the Sindh government had rightly given grants to the Arts Council as it showed exemplary performance in promoting art and culture in society. (NNI)