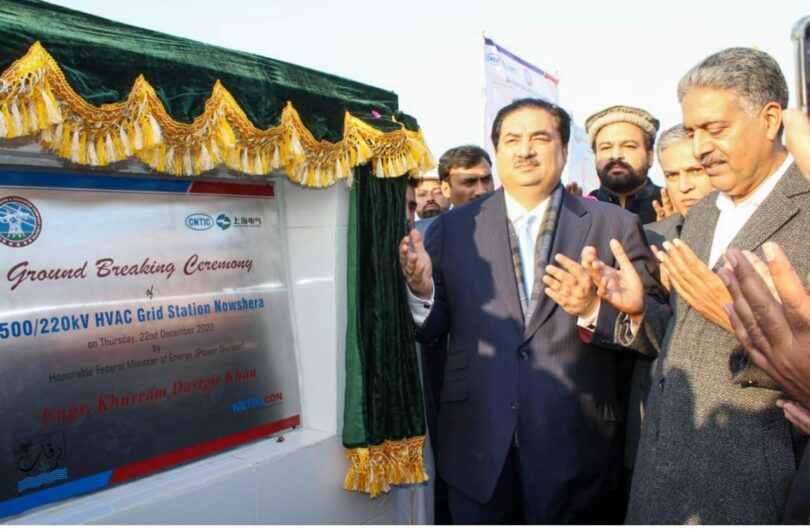 He was addressing after inspection of ongoing construction work on high voltage direct current (HVDC) convertor station at tehsil Azakhel Bala in Nowshera district. The Minister also laid the foundation stone of a 500KV HVAC grid station at Nowshera.

The Nowshera convertor station was being constructed under CASA-1000 Project for transmission of 1300 megawatt inexpensive, clean and environment friendly electricity from Kyrgyzstan and Tajikistan via Afghanistan to Pakistan.

CASA-1000 Project is a great example of mutual cooperation of governments of Pakistan, Afghanistan, Kyrgyzstan, and Tajikistan aimed at harnessing clean energy and building a shared regional electricity market, fighting climate change and increasing standard of living for their populations.

The minister said that CASA-1000 project was a mega project of electricity’s trade that would usher in a new era of economic prosperity and development besides meeting the growing energy demands of the country. Focus was being made to utilize domestic resources on priority basis to increase energy production while the power transmission system was being strengthened in the country.

Recalling PTI’s four years of poor performance in the government, he said it was a dark era with regard to poor and development in which the country’s progress as well as economy had suffered greatly. He said the coalition government had revived the pace of economic and energy development and started scores of electricity and energy projects in all four provinces of Pakistan. He said all sectors in KP would largely benefit from the CASA-1000 project after completion.

The Federal Minister said that works on different renewable energy projects were underway in the country that after completion would address the energy’s shortfall and promote industrialization. He said energy infrastructure, generation and transmission projects in Gawadar, Thar, Faisalabad, Quaid e Azam park and other areas of Pakistan would change the destiny of people.

Khurram Dastagir said that about 100MW inexpensive and affordable electricity would be provided to all coastal areas of Balochistan after its purchase from the neigbouring country. He said work on the Thar coal project having capacity of 1320MW has been started and that a strong foundation of making Pakistan energy surplus was laid..

Kurram Dastagir said that electricity in flood hit areas in all provinces including KP, Sindh and Balochistan were quickly restored for which NTDC and other relevant organizations deserved appreciation. The Minister was accompanied by Managing Director National Transmission and Dispatch Company (NTDC), Engr Dr Rana Abdul Jabbar Khan, senior officers of Wapda and Peshawar Electricity Supply Company (PESCO) besides other authorities associated with the mega project.

Earlier, the Minister was informed that construction work on the convertor station at Nowshera was underway and is expected to be completed by June 2023. HVDC converter station Nowshera would be linked by an HVDC transmission line to efficiently transmit electricity from hydropower-rich Kyrgyzstan and Tajikistan via Afghanistan to Pakistan. The station would then link power into Pakistan’s existing high voltage alternating current (HVAC) transmission network by delivering substantial benefits to the country’s power grids besides benefiting a large number of electricity users in the region.