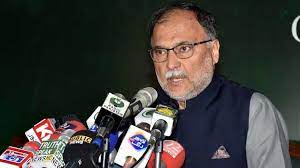 Addressing a press conference here on Saturday, he said the PTI during its tenure, not only damaged the economy but it also ignored the law and order situation as well as war on terrorism.

He alleged the PTI was brought into power by giving NRO to Imran Khan Niazi through RTS system in 2018 elections and an illegible, inexperienced and incompetent government was formed. He added the PTI government, through devaluation of currency and other inappropriate steps, had thrown the country into the worst inflation and debts.

The minister said that the economy was allowed to weaken from 2018 to 2021 during 4 years of the PTI rule.

“Now, the country is bearing the burden of Rs 5000 billion of debt services per year which was Rs 1700 billion in 2018,” he added.
He said that almost 100 per cent resources were being used for payments of debts and the country needed more loans to be run.
“No doubt, it is very crucial time for the nation, but we will succeed in bringing the country out of the crisis”, he added.

Ahsan said that economy and peace should not be politicized, expressing hope that Imran Khan Niazi would stop enmity with the country by suspending his anti-state campaign.

He said that not a single word was said by any international financial institution about default of the country but, the PTI and Imran Khan were continuously making campaign to create a psychological atmosphere about it which was actually a hybrid war against the nation.

The minister alleged that Niazi and his team was spreading desperation among the citizens, which could be dangerous for the society.
He said that the PTI deliberately doing all of this as it had used all funds of PSDP for providing subsidy on petrol till April 2022 and the exchequer got empty. (INP)