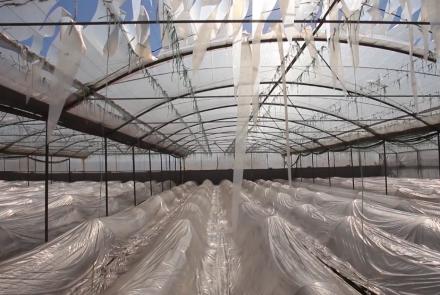 FARAH (TOLOnews): Local officials in the western province of Farah said that owners of greenhouses have suffered more than $3 million loss due to cold weather in the province.
Owners of greenhouses said they are unable to continue their business due to recent financial losses that they have suffered over cold whether.
“All the plastic layers of my greenhouse have been destroyed. Approximately, I may suffer 1,200,000 to 1,300,000 Afs every day. For example the investments that I made on fertilizers, seeds and other materials,” said Humayon, owner of a greenhouse.
“The expenses of the workers, fertilizer and other facilities, is now on us,” he said. The provincial agriculture and irrigation department said that the harvests of nearly 3,000 acres of agriculture greenhouses have been wasted.
“Based on initial information, cucumber and tomatoes greenhouses on 3,000 acres of land have been destroyed, which is estimated to cause $3.5 million losses,” said Nooruddin Anas, an official of the provincial department.
“These losses are irreparable due to two issues. First is the expenses that have been spent so far. You know that the seeds that they cultivated which are fertilized seeds and are expensive,” said Abdullah Ali Zai, an economist.
According to the statistics of the provincial department of agriculture and irrigation, 85% of Farah’s residents are engaged in farming and agriculture.
Many of the farmers have recently established greenhouses, aiming to earn good harvests.