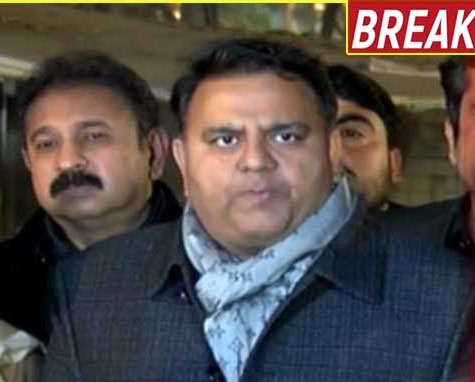 LAHORE (INP): Pakistan Tehreek-e-Insaf (PTI) Vice President Fawad Chaudhry has urged the governor to immediately notify the dissolution of the Punjab Assembly, adding that the opposition leader Hamza Shehbaz is being contacted to seek names for the caretaker government.
Addressing a press conference today, Fawad Chaudhry said that they decided to dissolve the Punjab Assembly yesterday and Governor Baligh-ur-Rehman will hopefully sign the summary. Fawad urged the governor to not wait for 48 hours for signing the summary and issuing a notification regarding the dissolution of the Punjab Assembly.
“[The Opposition Leader in the Punjab Assembly] Hamza Shehbaz is being contacted to seek names for the caretaker government. We are hoping that impartial names will come forth to hold free and fair elections.” He said that the Khyber Pakhtunkhwa (KP) Chief Minister Mahmood Khan had scheduled to arrive in Lahore today but he could not reach here owing to bad weather. “KP CM has also prepared the summary for the dissolution of the provincial assembly.”
Regarding local government (LG) polls, he said that the election commission decided to hold timely elections in Karachi and Hyderabad, whereas, the Islamabad High Court (IHC) had ordered to organise local government polls in the federal capital. He criticised interior minister Rana Sanaullah for violating the high court’s orders. He added that the Sindh High Court (SHC) also rejected Muttahida Qaumi Movement’s (MQM) plea to postpone the second phase of the Sindh LG polls.
Fawad said that all political parties trying to flee from the elections. He demanded the Supreme Court (SC) take notice of the violation of high courts’ orders. He expressed hope that the ECP will implement the order regarding the elections. He said that the PTI Sindh chapter is ready for a strong protest in case of any delay in the LG polls. He reiterated the PTI will dissolve KP Assembly after the dissolution of the Punjab Assembly.
He said that the federal government will have to organise the general polls. He suggested the incumbent government hold talks regarding the framework of the upcoming elections. Fawad said that the election schedule should be the same for the whole country. To a question, he said that the president can ask the premier to take the vote of confidence which is his constitutional right.
Regarding the caretaker setup, Fawad said that consultations were started for finalising the names for the caretaker government and PTI will give names to Chief Minister Pervaiz Elahi. The chief minister will forward the names to the opposition leader as per the constitution. The PTI VP, while replying to another question, said that they will not anyone hinder the ongoing investigation into the Imran Khan gun attack case. He said that PTI will not object to the return of Nawaz Sharif to the country. Fawad claimed that he heard from someone that Pakistan Muslim League Nawaz (PML-N) is not giving tickets to 20 individuals.