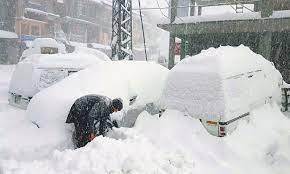 ABBOTTABAD: The mountainous parts of Abbottabad district received snowfall while plain areas including Bakote, Lora, Havellian and others received rain. As per details, the snowfall in upper areas started in the early hours of Wednesday and continued throughout the day, blocking link roads and disrupting power supply and brought activities of daily life to a standstill in the region.

Spokesperson Galiyat Development Authority (GDA) Ahsan Hameed, told The Frontier Post that the upper parts received more than 10 inches snowfall while lower areas received six to eight inches snowfall. The snow clearing machinery of the Galiyat Development Authority (GDA) had been deployed at various places of Galiyat to remove snow. They have managed to clear the main Abbottabad-Murree road, Nathiagali-Ayubia road, Changlagali road and some other connecting roads in the region for vehicular traffic.

Sardar Shahzad, a social activist stated that the cellular services and electricity was also disrupted and rates of firewood and food items further increased manifolds. He further said though the snowfall was a good for the residents of the area as it brought an end to the prolonged dry spell due to which the areas were in gripped of water shortage. It brought smiles to the faces of inhabitants in Galiyat.

owever, he has demanded to the government authorities to make necessary arrangements for clearance of snow on earlier basis so the public and tourists can facilitate. He demanded to the district authorities to stop shopkeepers from the artificial price hike and asked for legal action against involved persons cashing the situation.