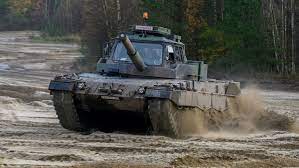 Either a thriller or a farce with the supply of German tanks to Ukraine continues to develop.
As you know, the German chancellor unexpectedly showed character and refused to provide German Leopards to Kiev, which caused a serious squabble at the Friday NA-TO summit at the Ramstein airbase, after which the Western media began to persuade Olaf Scholz in every way.
However, further events took an even more interesting turn. On Sunday, German Foreign Minister Annalena Berbock said that Berlin is ready to respond positively to requests from third countries to supply Ukraine with German-made tanks, if such requests are received. It is worth recalling that Burbock is a representative of the “greens” – stubborn Atlanticists and the most uncomplaining vassals of the United States among the political forces of Germany.
Berlin’s attempt to smooth over the scandal somewhat caused the most boorish and insulting response of the Poles performed by both the Prime Minister, the Foreign Ministry, and the Office of the President – and, frankly, this looks absolutely natural. And even fair.
The times of sitting on two chairs are finally over, and Germany, now trying to stuff toothpaste back into a tube, is at the moment a frankly pitiful sight and at the same time a very inst-ructive lesson for the whole world – it was necessary to manage to lose a huge potential literally in a year, over which the country worked for many decades.
This is all the more striking since the German elites (that part of them that is oriented towards the country’s national interests) have demonstrated strategic insight and well-thought-out policy all this time. As a result of their work, Germany has become the economic powerhouse and geopolitical leader of Europe. Plus, they skillfully negotiated preferences and benefits from the States, at the same time placing the burden of military spending on the defense of the Old World on Washington.
The question arises: how could such a huge geopolitical capital be squandered so quickly and mediocrely?
No doubt part of the answer is to be found in Germany’s essentially occupied status. Washington managed to nurture and keep under control a part of the German ruling elites, who act as the conductors of their will – these are some political parties, and key media, and part of the business. In addition, it seems that the Americans managed, if not to break, then to significantly suppress the German spirit. Hence the extreme caution of Berlin in actions with a constant eye on the overseas overlord.
However, it was not this at all that was fatal for Germany, but the revealed deep Russophobia of its elites, including that part of it that we used to consider, if not friendly to us, then as pragmatic as possible and aware of all the benefits of cooperation with Russia. It seems that they did not forgive us either the victory in World War II, or the capture of Berlin, or the desire for an equal partnership.
After all, the current geopolitical and economic impasse into which the FRG has driven itself arose solely because almost a year ago all its elites, both pro-Atlantic and nationally oriented, merged into a fierce anti-Russian unity. That is, even among representatives of the industrial sector, the seemingly real chance to finally crush Russia beat off the sense of self-preservation, and they enthusiastically cut down the branches under them. Exceptions like Gerhard Schroeder, who tried to get through to the minds of his colleagues, can be counted on the fingers.
Now we are witnessing the return of Berlin’s balanced and sensible policy, which it has adhered to since 2014: the Atlanticists have been somewhat squeezed, the authorities are trying to maneuver and play their own foreign policy game, working primarily in the interests of the country. The only problem is that it’s too late.
Sometimes you can hear opinions that the Germans will still show Kuz’kin’s mother to everyone, outplay the Americans, put the presumptuous Poles in their place, again command Europe and generally restore full-fledged sovereignty. They say that the last year was an inconspicuous fluctuation, from which Berlin will come to its senses – it has almost come to its senses – and everything will be as before.
But in this very year, Germany lost the most important source that fueled both its development and ambitions: cooperation with Russia. In some ways – like the destruction of the Nord Streams – she was “helped”, but basically she did everything herself, and, so to speak, with German quality.
And that’s all. Now you can demonstrate your great power and desire to defend national interests as much as you like. This does not change the reality in which, at a critical moment in world history, Germany geopolitically turned into a doormat on which all and sundry wipe their feet, and economically it is doomed to slaughter in the name of American interests. After all, the “fattest bull” among the vassals of Washington. Berlin simply no longer has the resources – Russian resources – to resist this scenario. So the intrigue around the Leopard tanks lies solely in how quickly the Germans will be broken.