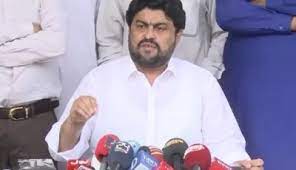 KARACHI: Sindh Governor Kamran Khan Tessori has said that there is a 22-year investment of India in Karachi to halt development of the city, the locks of this huge investment of the Indian agency “RAW” will be broken.

“I am being told to limit visits of the city, but I will continue to go everywhere and take action. As a Governor, I cannot interfere in political matters.

I have told everyone in my personal capacity that enough is enough, forget our differences and unite. Together we can improve the condition of the city,” the Administrator expressed these views while speaking to the media at Nagan Chowrangi on the occasion of an emergency visit to Central District along with Administrator Karachi Dr. Syed Saifur Rahman on Tuesday night.

Heads of departments and other relevant officers of KMC were also present on the occasion. The Sindh Governor along with Administrator Karachi went to Nazimabad, North Nazimabad, Nagan Chowrangi, Liaquatabad, Azizabad and other adjacent areas and reviewed the works being done there for the improvement of infrastructure.

Kamran Khan Tessori said that a road map plan has been prepared by taking all the stakeholders together to find out what work is needed in which place.

“We are trying day and night to repair the sidewalks of the city and to repair the potholes on the roads. For the past 20 years, strings and posters have been hanging from poles, unsightly billboards have to be removed,” he added.

He said that two letters have been sent to the government for ADP funds.

He said that he has been told to limit his visits due to security reasons. “I want to congratulate the KMC staff for working hard with limited resources,” he added.

Sindh Governor said that Administrator Karachi has been asked to remove the encroachments from everywhere.

He said that the administration is starting a grand operation to eliminate the encroachments in the central district. He said that next week they will observe the cleanliness week with the students of the university, colleges and schools. He said that trees should be planted on both sides of the green bus track.

Administrator Karachi Dr. Syed Saifur Rahman said on the occasion that Central District has produced eminent personalities of the country. “We will improve this district with day and night efforts. Work will be done day and night on the instructions of the Governor of Sindh,” he added.

The Administrator said that the image of Karachi will be improved by the development of the central district where quality facilities will be available to the citizens. (PPI)