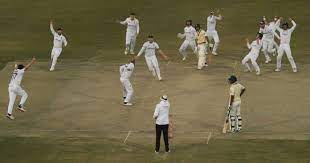 ISLAMABAD (AP): The flat wicket at Pindi Cricket Stadium has received another demerit point within nine months from the International Cricket Council after England recorded an historic 74-run victory over Pakistan in the first test at Rawalpindi last week.
The ICC on Tuesday said match referee Andy Pycroft rated the pitch “below average” as England plundered a world-record 506-4 on Day 1 with four of its batters scoring centuries.

England went on to score 657 in 101 overs before Pakistan also replied with 579, with three batters from the home team scoring hundreds.
“It was a very flat pitch which gave almost no assistance to any type of bowler,” Pycroft said in an ICC statement.

“That was the main reason why batters scored very fast and both sides posted huge totals. The pitch hardly deteriorated during the course of the match.”

England went on to win its first test in Pakistan in 17 years after Pakistan lost its last five wickets for nine runs and got bowled out for 268 in dimming light on the last day. England has since clinched the series with a narrow win in the second cricket test at Multan.

In March, a similar type of wicket at the same venue received a demerit point from the ICC when only 14 wickets fell over five days in a test match between Pakistan and Australia.

A venue can be suspended from hosting international cricket if it accumulates five demerit points within five years.