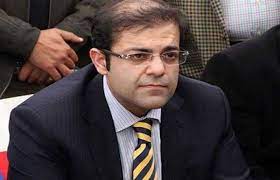 The court on Tuesday also directed Suleman Shehbaz to appear before the relevant court within two weeks.

Suleman Shehbaz earlier reached Islamabad High Court (IHC) to surrender before the court and to attend the hearing of his plea seeking protective bail.

On December 8 last, the IHC ordered Suleman Shehbaz to surrender himself before the court by December 13.

It is pertinent to mention here that a court had declared Salman Shehbaz and Tahir Naqvi absconders in July this year in a money laundering case against them.

Pertinent to note that the National Accountability Bureau (NAB) had written a letter to the UK government to hand over Salman, who was wanted by the accountability watchdog under money laundering charges and the Telegraphic Transfer scandal.

An accountability court in 2019 also issued non-bailable warrants for the arrest of Salman in a money laundering case. He went abroad in 2018.

The Federal Investigation Agency’s (FIA) banking crime circle had claimed to have unearthed billions of rupees stashed money in the bank accounts of his employees.

While talking to media outside the IHC, Suleman Shehbaz on Tuesday said that former prime minister Imran Khan has no faith and belief, adding that Khan used to praise former army chief General (retired) Asim Bajwa day and night but now he calls him a hypocrite.

He said Pakistan Tehreek-e-Insaf (PTI) leadership lodged bogus cases against Pakistan Muslim League-Nawaz (PML-N) leaders. “We defended ourselves in London in fake cases and get a clean chit from them,” he added.

He said that Shahzad Akbar – then adviser of ex-PM Imran Khan – used to bring Daily Mail correspondent David Rose to NAB cells during the period when PML-N leaders were in detention. He said that Shahzad Akbar gave a fake briefing to David Rose and published fake news in the British publication Daily Mail. He also said that the Sharif family getting clearance from Britain’s National Crime Agency (NCA) is a big slap on the face of Imran Khan.

“We will chase Imran Khan until he gets sentenced in the open and shut case,” he said. He said that corruption was at its peak during the tenure of Imran Khan’s government.

Suleman said that Imran Khan create drama regarding cipher and later he begged the United States.