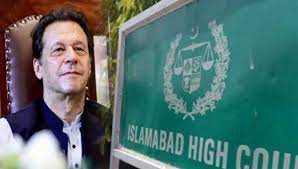 ISLAMABAD (TLTP): The Islamabad High Court (IHC) has fixed for hearing a petition seeking the disqualification of former premier Imran Khan as a lawmaker for “concealing” his alleged daughter in his nomination papers. The IHC’s Registrar Office has issued cause-list showing that the date of hearing of aforementioned case is December 20.
IHC Chief Justice Aamer Farooq had issued a pre-admission notice to the PTI chief and the Election Commission of Pakistan (ECP) on December 9 in the petition of a citizen Sajid Mehmood, asking their counsels to help the court decide if the petition is maintainable. The petitioner is seeking the disqualification of the PTI chief, an MNA from the NA-95 Mianwali-I constituency, contending that all candidates contesting elections for either national or provincial assemblies are required to furnish an affidavit with respect of their credentials and assets.
He said one such information is about the children who are dependent on a candidate, and in this regard, Imran had wrongly mentioned two children — “Qasim Khan and Sulaiman Khan” — and had omitted the third. “The respondent no. 1 [Imran Khan] has deliberately and willfully failed to declare his daughter Tyrian White in the relevant columns of the nomination papers and the affidavit appended therewith, hence he is not sagacious, righteous, honest and a man of good character in terms of Article 62 of the Constitution,” according to the petition.
It continued that “Article 62 of the Constitution, as interpreted by various judgments of the superior courts, prescribes that a candidate shall only qualify to be elected as a member of the National Assembly if he is of good character and is not commonly known as one who violates Islamic Injunctions; and he has adequate knowledge of Islamic teachings and practices; obligatory duties prescribed by Islam as well as abstaining from major sins.” The TLTP learnt that the petitioner urged the court to summon the former prime minister and inquire about the reasons for the violation of Article 62 of the Constitution, which says, “a person shall not be qualified to be elected or chosen as a member of Majlis-e-Shoora (Parliament) unless — he is sagacious, righteous, non-profligate, honest and ameen, there being no declaration to the contrary by a court of law”.
He also pleaded to the court to question Imran for “submitting a false declaration and affidavit and as to why he should be allowed to be a member of the parliament … and may not be de-seated in all accumulated consequences for the violation of the Constitution and the law.”