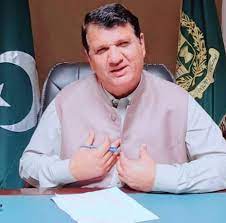 Addressing party workers convention here, Engr Amir Muqam said that PML-N was the strongest and most popular political party of Hazara division with strong roots in masses where former Prime Minister Nawaz Sharif had completed record devolopment projects for benefits of its people.

Engr Amir Muqam said that incompetent rulers of the province during their nine years long rule in Khyber Pakhtunkhwa and four years in centre has completely failed to deliver and address the area’s problems. He said Tosha Khana and PTI foreign funding cases have exposed the corrupt practices and lies based politics of Imran Khan.

He said that PTI Chairman had neither fulfilled the promise of construction of five million houses nor provided jobs to 10 million people and was proved a certified lair. He said reelection would be held in Khyber Pakhtunkhwa in case of disolution of KP assembly.

Engr Amir Muqam who is also PML-N KP President said that general election would be held in line of the constitution and the present government would complete its tenure. He said presence of entire leadership of PML-N Hazara in today’s workers conventions has reaffirmed that the party was united under the leadership of Prime Minister Shehbaz Sharif and PML-N Quaid Nawaz Sharif in Hazara.

He said that we are all the workers of Nawaz Sharif who made Pakistan an atomic power, established network of motorways and enhanced the prestige and dignity of Pakistan. Muqam said that acquittal of PML-N Vice President Maryam Nawaz Sharif in Avenfield Reference, Interior Minister Rana Sanaullah in narcotics case and Daily Mail’s apology to PM testified their innocence.

Soon after arrival from abroad, Muqam said that he organized workers conventions at Peshawar, Mardan and Swat to celebrate Daily Mail’s apology to PM. He said people have pinned high expectations from PML-N and would reject Tosha Khana looters in the next general election.

Muqam said sucessful holding of the convention on a short notice here was highly praised worthy. The convention was attended by all PML-N leadership including Murtaza Javed Abbassi, Sardar Aurangzeb Nalota, Inayatullah Jadoon and all wings of the party. The participants raised full throated slogans in favour of Nawaz Sharif, Prime Minister Shehbaz Sharif and Amir Muqam.