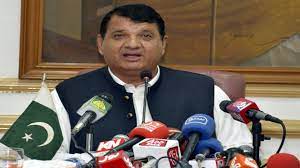 He said all the election promises of Imran were proved as pack of lies. Addressing a big public gathering to welcome new entrants into Pakistan Muslim League Nawaz here, Amir Muqam said that Imran had made tall promises in the last general election to construct five million houses for poor, provide jobs to one million youth and convert PM House into a university and that non of these promises were fulfilled by him despite his nine years long rule in KP and four years Government in Punjab and Centre.

Following successful no confidence motion against Imran Khan, he said that the PTI Chairman had leveled baseless allegations against political opponents and leadership of the state institutions for ulterior motives. He said Imran did not like neutral and wanted to reach power corridors through backdoor by dragging state institutions into politics and that such ill attempts would not succeed any more.

Imran Khan was found guilty of corrupt practices in Tosha Khana and PTI Foreign funding cases, adding these high level cases exposed his anti corruption narrative. He said inspite of nine years rule in Khyber Pakhtunkhwa and four years Government in Centre and Punjab, he said PTI has failed to deliver and address problems of masses and that Billion Trees Afforstration Project was also taken over by NAB.
He said that people of Khyber Pakhtunkhwa has started distance from Imran due to his politics of accusations poor governance, corrupt practices and were looking towards PML-N for political change. The employees of Khyber Pakhtunkhwa Government were protesting for their rights, payment of allowances, salaries and others incentives while social media influencers were recruited on handsome salaries by the PTI rulers for self- projection on the taxpayers money.

On the other hands, he said PML-N Government believed in practical work and speedy devolopment of Pakistan. He said soon after the Prime Minister Shehbaz Sharif assumed the power had visited Shangla and announced a mega development package for people. The Prime Minister has led from the front during devastated flood situation and visited all the floods affected districts including KP where he personally inspected rescue, relief and rehabilitation operations. The Prime Minister also announced a mega relief package for floods victims under which financial assistance worth billions of rupees were provided in a transparent manner. Engr Amir Muqam said that people of Khyber Pakhtunkhwa pinned high expectations from PML-N and would reject PTI in 2023 general election.