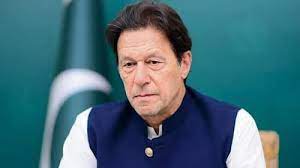 ISLAMABAD (INP): A district and sessions court in Islamabad has admitted the Election Commission of Pakistan’s (ECP) plea against former prime minister Imran Khan in the Toshakana case. The verdict on the admissibility of the plea was reserved on December 12 by the court after hearing arguments from both sides.
The additional session judge in his verdict fixed the plea for hearing on January 9 and issued notice to former prime minister Imran Khan to appear before in person before the court.
In November, a trial court took up the Toshakhana reference filed by Election Commission against Khan for allegedly indulging in corrupt practices, which the former premier denies. The ECP declared Chairman Pakistan Tehreek-e-Insaf (PTI) disqualified in its verdict in the Toshakhana reference.
In the written judgment, the ECP said: “As per the statement of Imran Khan he had purchased the gifts from Toshakhana paying 21.564 million rupees while the Cabinet Division said that the gifts had a value of 107.943 million.”
“The amount in his bank account was around half of the value of the state gifts. Imran Khan was bound to declare the cash and bank details in his returns but he didn’t declare it,” Election Commission of Pakistan (ECP) decision read.
‘NRO-2’ great injustice to Pakistan, reiterates Imran Khan
Pakistan Tehreek-e-Insaf (PTI) Chairman Imran Khan said on Thursday giving “NRO-2” to “thieves” was a great “injustice” to the country.
Addressing members of PTI’s student wing, Mr Khan came down hard on the ruling coalition’s leaders and said “these thieves flee the country whenever they are about to be arrested and now, after reaching a deal with the country’s powerful quarters, even PML-N supremo Nawaz Sharif is planning his return.”
The former prime minister said only justice could liberate a nation and pledged to continue his struggle for ‘real independence’ till his last breath. He said Allah had made jihad obligatory on all Muslims so that everyone stood against oppression and injustice. “As long as there is lawlessness in society, the strong will continue to oppress the weak,” he added.
Mr Khan claimed that tax collection and employment rate were record high during the PTI’s government, adding that now a ‘cabal of crooks’ had been imposed on the masses.