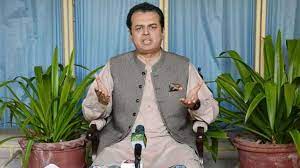 ISLAMABAD  Pakistan Muslim League-Nawaz (PML-N) leader Talal Chaudhry said on Thursday that former prime minister and Pakistan Tehreek-e-Insaf (PTI) chairman Imran Khan kept his daughter’s name hidden in details provided to the Election Commission of Pakistan (ECP) back in 2004 despite being a member of the National Assembly (MNA) and now Article 62 and 63 of the constitution will be applied on him.

Talking to media in Islamabad on Thursday, he said that a lot of things would be recovered when raid is carried out at Bani Gala. Taking a jibe at the former PM, Chaudhry said that a man who kept his daughter’s name hidden can kept anything hidden, adding that he [Imran Khan] would have been stoned, had this been a state of Madina.

The PML-N leader further said that no case against Imran Khan would be made on political basis as stabilising economy is government’s top priority but revealing the details pertaining to Toshakhana is also necessary.