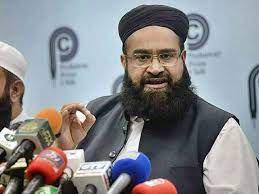 He, in an exclusive talk with APP, said Pakistan had presented solid evidence of Indian terrorism in Pakistan before the world on many an occasion. Ashrafi, who is also the chairman of Pakistan Ulema Council, said India was robbing the peace of Pakistan for the last twenty years via Afghanistan.

After the arrival of Afghan Taliban in power, there were certain enemy forces that wanted to sabotage the relations of both countries, he added.

He termed the attack on Pakistan’s ambassador in Kabul and the situation at Chaman border ‘sorry state of affairs’, adding that Pakistan was resolving all issues with Afghanistan through dialogue and reconciliation would continue with the same spirit in the future.

To a query, Ashrafi said Pakistan and Afghanistan relations were strong as it was hosting around three million Afghan refugees for many years. Those who were plotting to spoil the Pak-Afghan ties would not meet their ulterior motives anyway, he added.

He said Pakistan’s peace policy had been acknowledged by the whole world as more than 80,000 Pakistanis had sacrificed their precious lives besides bearing financial loss of almost 68 billion dollars in the war on terror in ten years.

He said in last two days, the interior and foreign affairs ministers had presented evidence of India’s subversive intentions against Pakistan and urged the world to take immediate steps against India’s terrorism and extremist thinking.

Ashrafi said the stance of the Organization of Islamic Cooperation (OIC) on the issue of Kashmir and Palestine was very much clear. He said the visit of the OIC secretary general to Pakistan and Azad Jammu and Kashmir was a clear-cut expression of support to Pakistan’s stand on the Kashmir issue and solidarity with Kashmiris.

He appealed to the OIC, the United Nations and the world human rights watchdogs to play their part in stopping India’s subversive intentions.

Responding to the question, Ashrafi said the Islamic world and as well as other countries world like to invest in Pakistan. “Our brother Islamic countries are always standing with Pakistan in difficult situations,” he added.

He said it was the responsibility of the political and religious leadership of Pakistan to bring political stability in the country and resolve political issues through table talks.

He said Pakistan Tehreek-e-Insaf (PTI) chief’s campaign against the former army chief was condemnable as General (Retd) Bajwa was a benefactor of Imran Khan and his government.

He said the Pakistan Ulema Council supported the negotiation efforts of the president and urged the PTI leadership to bridge the gap for political stability in the country. He further said the issue of elections could be settled down only through the negotiation process with the political parties in power. (APP)