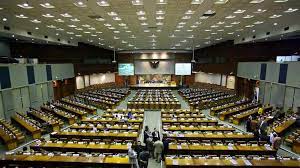 JAKARTA (Reuters): Indonesia’s parliament passed into law a bilateral extradition agreement with Singapore on Thursday, in a move Jakarta expects to help authorities bring to justice people accused of stashing offshore billions of dollars of state money in the city-state.

The absence of an extradition treaty has been a sensitive issue for Indonesia, which has complained about the difficulty of going after some fugitives accused of embezzling large sums during the 1997-1998 Asian financial crisis.

Under the extradition treaty, signed by the countries’ leaders in January, people who had committed 31 types of crime will be liable to be extradited and it will apply to offenses committed up to 18 years ago, Indonesia has said.

The agreement would also mean that people would not be able to escape justice by changing their citizenship, it said.

Speaking after parliament’s approval, Indonesia’s law and human rights minister Yasonna Laoly said that the law “would give legal certainty for the two countries in the process of extraditing fugitives.”

Singapore has said the agreement “will also be helpful to Indonesia’s own efforts to prevent suspected criminals from fleeing overseas, and for them to be apprehended in Indonesia.”

Indonesia has set up a so-called “BLBI” task force that is going after $8 billion of bailout funds given to bank owners and borrowers after the Asian financial crisis in the late 1990s that were never repaid.

Indonesia has long attempted to pass the law.

In 2007, Indonesian President Susilo Bambang Yudhoyono and Singaporean Prime Minister Lee Hsien Loong oversaw the signing of an extradition treaty and defense cooperation agreement, but it was never ratified by Indonesia’s parliament.