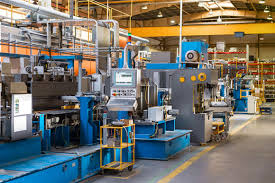 WASHINGTON: Industrial production declined 0.2 percent in November. Decreases of 0.6 percent for manufacturing and 0.7 percent for mining were partly offset by a rebound of 3.6 percent for utilities following three months of declines. At 104.5 percent of its 2017 average, total industrial production in November was 2.5 percent above its year-earlier reading. Capacity utilization moved down 0.2 percentage point in November to 79.7 percent, a rate that is 0.1 percentage point above its long-run (1972–2021) average.

Decreases were broad based across market groups with the primary exceptions of consumer energy products, energy materials, and defense and space equipment. The output of consumer durables fell about 2 percent, led by automotive products, while the output of consumer non-energy nondurables decreased about 1/2 percent. The production of business equipment fell 0.8 percent, reflecting decreases for transit equipment and for industrial and other equipment. The indexes for construction supplies, business supplies, durable materials, and nondurable materials all declined 1/2 percent or less.

Manufacturing output decreased 0.6 percent in November but remained 1.2 percent above its year-earlier level. The indexes for durable and nondurable manufacturing both declined 0.6 percent, and the index for other manufacturing (publishing and logging) slipped 0.4 percent. Within durables, increases were recorded by wood products, by computer and electronic products, and by aerospace and miscellaneous transportation equipment; these gains were outweighed by losses for other industries, particularly for motor vehicles and parts. Within nondurables, most industries registered decreases, with only printing and support posting an increase.

Note. The statistics in this release cover output, capacity, and capacity utilization in the U.S. industrial sector, which is defined by the Federal Reserve to comprise manufacturing, mining, and electric and gas utilities. Mining is defined as all industries in sector 21 of the North American Industry Classification System (NAICS); electric and gas utilities are those in NAICS sectors 2211 and 2212. Manufacturing comprises NAICS manufacturing industries (sector 31-33) plus the logging industry and the newspaper, periodical, book, and directory publishing industries. Logging and publishing are classified elsewhere in NAICS (under agriculture and information respectively), but historically they were considered to be manufacturing and were included in the industrial sector under the Standard Industrial Classification (SIC) system. In December 2002 the Federal Reserve reclassified all its industrial output data from the SIC system to NAICS.