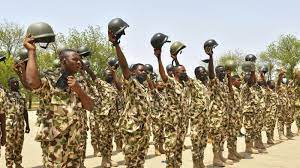 Nigeria has been experiencing serious security threats for years, as terrorist organizations and various armed gangs have proliferated throughout the country, carrying out crimes and insurgent violence. In consequence, the army is stepping up its operations, and the pressure on military personnel is increasing.
The Nigerian Army will no longer accept lack of interest or low morale as a valid excuse to resign from military service, local media has reported.
In the past, reasons given by soldiers wishing to retire from army life have included loss of interest, low m-orale, corruption in the se-rvice and intimidation by s-uperiors. Some soldiers ha-ve pointed out that corruption is so rampant in the ar-my it is hampering the anti-terrorism campaign in no-rth-eastern Nigeria. Corru-ption was also cited as the underlying reason for lack of interest in military service.
Previously, the media reported that more than 500 soldiers in the north-east of Nigeria wrote to the Chief of Army Staff, Lieutenant General Faruk Yahaya, wanting to leave the army. Their petition comes at times when the military faces security challenges, fighting terrorists and bandits across the country.
The army responded to the request saying that personnel coming and going as they please “does not augur well” for the military, add-ing that most soldiers wishing to quit the force offer excuses which are not “co-gent enough or professional”.
It is necessary “to ensure that the expertise acquired [by soldiers] is not easily lost by the service and to recoup the investment made [by the army] to the benefit of the nation, while service personnel [quitting] at will does not augur well for the Nigerian Army,” the statement read.
According to the statement, as military service in the country is voluntary, there is an opportunity for “any personnel to leave at different times”. However, taking into account the resources and efforts which are invested in training staff, their decision to leave is “inimical to the system”. Therefore, the reasons for quitting the service must be cogent, legitimate and valid.
“Loss of interest in military service will no longer be tolerated as a basis for discharge. This reason is, to say the least, lame and the-refore not accepted. Perso-nnel are expected to explain their reason for lack of interest,” the army stated.