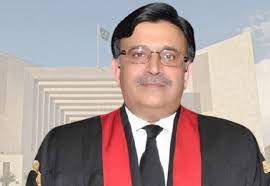 Chief Justice of Pakistan Justice Umar Ata Bandial has admitted that the corruption in the country couldn’t be eradicated, despite the court decisions, due to the weaknesses in the system. During the hearing of a petition filed by Pakistan Tehreek e Insaf (PTI) Chief Imran Khan challenging amendments in the NAB Ordinance, the JCP noted that it was the responsibility of the Parliament to introduce legislation for bringing betterment in the system. The Chief Justice was of the view that the IGs in provinces are changed after every five months while SHOs of police stations must be replaced within three months.

Unfortunately, our nation has lost its dignity and pride in the majority of the fields including industrial development and growth, tour and tourism, health and local governance, education, and sports as well as foreign investment and trade, however, we tremendously progressed in corruption and malpractices, extremism and intolerance, lawlessness, and crimes. Presently, Pakistan is one of the biggest victims of corruption in the world and this cancer has destroyed every aspect of our society. The Global Corruption Perception Index (CPI) 2021 ranked Pakistan at 140 positions in the list of the least corrupt nations. According to Transparency International (TI) Pakistan, Police, Contract and Tendering agencies, Judiciary, and Education sectors are the most corrupt institutions meanwhile rest of the government departments also have a due share in the promotion of this menace.

This is a highly shameful and grave situation for the entire nation which merits immediate attention from the relevant institutions. Interestingly, the monster of corruption has exceeded all limits, whereas multiple legislations, and numerous LEAs, SIAs, financial regulators, and anti-corruption watchdogs failed to curb this ailment. The government, judiciary, prosecutors, and investigators blame others for their failure and do not ready to address their shortcomings. Every person is ready to correct and reform others but no one is ready to bring reform and correctness in themselves, therefore problems are multiplying every single day and no signs of improvement are visible so far.

The honorable judges had expressed anger over ever-growing corruption in society and mourned the poor and shady legislation by the lawmakers Historically, Judges and Generals had caused significant constitutional, political, and monetary losses to the country due to their unwarranted and unjustified activism in the past. Corruption is a multifaceted nationwide curse, therefore each institution should remove technical and legal flaws to strengthen its anti-corruption regime without interfering with other states’ organs, so, this common goal could be achieved through collective efforts.