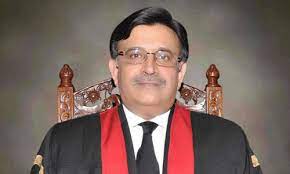 The Chief Justice of Pakistan Umar Ata Bandial urged the government to keep international laws in mind while taking any decision, otherwise, the company will go to the international arbitration forum. The honorable Chief Justice observed these remarks during the hearing of the presidential reference regarding the revision of the mining contract on the Reko Diq project. According to the Chief Justice, there is a vast difference between the judicial system of Pakistan and the world, while improving the justice system was a big challenge for the judiciary. The Chief Adjudicator urged foreign investors to trust the justice system of Pakistan.

The famous Reko Deq gold mining case has attracted worldwide publicity, and public criticism due to imaginary tales of corruption, minerals confiscation as well as untrue human and property rights of Baloch people during the past decade. Political rivalry brought the issue to the Supreme Court amid intensified judicial activism. During the multiple hearing, neither government lawyers nor the company’s counsel appraised the court about binding clauses that might have legal and monetary consequences for the government at the international level. A three-member bench of the honorable Supreme Court canceled the Balochistan government contract with the foreign firm while declaring it contrary to public law. Later, the victim Tethyan company went to the International Centre for Settlement of Investment Disputes (ICSID) for financial compensation, which slapped Pakistan will a penalty of $ 5. 84 billion.

Presently, the Pakistani judiciary has struck a unique situation as its previous decision has exposed the country to an irreparable monetary loss. At the same time, its newest verdict can undo the mistakes of its predecessors, which clesrly exposes the weakness and fragility of our judicial system. Apparently, our judiciary solely depends on legal counsels while it does not have any system of cross-examination, or analytical research, therefore, a system that peers through others’ optics could not serve a speedy and impartial justice. Over the past seven decades, Pakistan’s judicial system is in the process of revolution and improvement, and still, our counsels and adjudicators are beginners in this field and the nation is paying a heavy price for their incompetence and over patriotism. Hence, how much time it would take to be fully groomed?