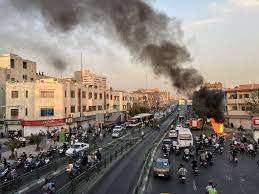 TEHRAN (AFP): Iran has summoned the Italian ambassador to protest “interventionist” policies, the foreign ministry said late Thursday, a day after Rome called in Tehran’s envoy over its response to nationwide protests.

The Islamic republic has been gripped by protests since the September 16 death in custody of Mahsa Amini, a 22-year-old Iranian Kurd, following her arrest in Tehran for an alleged breach of the strict dress code for women.

Iran says hundreds of people have been killed in the unrest, including members of the security forces, and thousands have been arrested nationwide.

Tehran summoned Italy’s Giuseppe Perrone to protest “the continuation of the interventionist statements and actions of some Italian officials in the internal affairs” of Iran, the foreign ministry said in a statement.

“Selective and double standard approaches regarding human rights are completely unacceptable and rejected from the perspective of the Islamic republic of Iran,” it added.

In more than 100 days of protests in the country, Iran has called in over a dozen ambassadors from Western countries including Britain, France and Germany.

“I strongly requested not to carry out any more executions, to stop the violent repression and to enter a dialogue with protesters,” Tajani tweeted on Wednesday.

“The Italian government will do everything possible to guarantee respect for human rights in Iran.”

Iran executed two people in connection to the protests earlier in December. The judiciary has said nine others have also been sentenced to death.

Tajani had previously condemned the situation in Iran as an “unacceptable shame,” saying Rome adopted a “hard line” in defense of women.

Iranian authorities accuse hostile foreign powers, mainly its arch-enemy the United States but also some European countries, of stoking what they call “riots.”