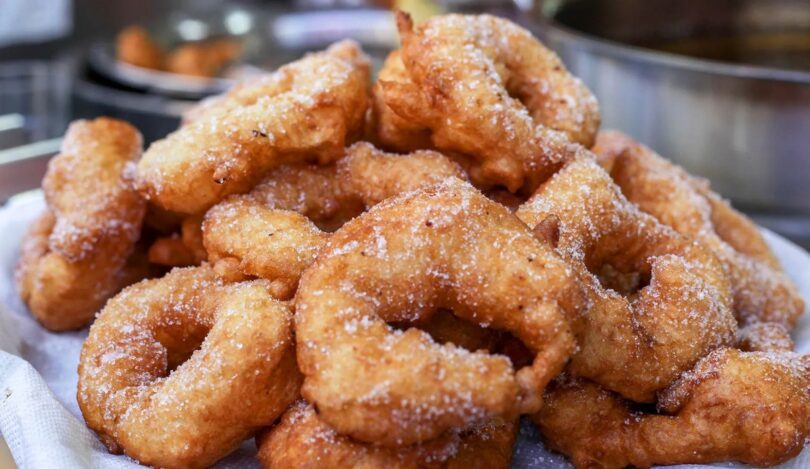 Hanukkah, literally “dedication” in Hebrew, commemorates the Maccabean revolt that led to the historical recovery of Jerusalem from the Greek empire and the rededication of the menorah in the Second Temple around 168 BCE. Religious texts later extrapolated on the event in Shabbat 21b of the Talmud, writing of the miracle of the oil that lasted for eight days. Oil and fried foods have ever since been inextricably linked to the holiday.

But there’s more to explore in the culinary canon of the Jewish “Festival of Lights” beyond the traditional latkes (grated potatoes mixed with onions, egg and fried into crunchy pancakes) and sufganiyot (doughnuts stuffed with a piping bag full of jam) that are as essential to celebrating Hanukkah as candles for the hanukkiah – the nine-branch menorah used exclusively for the holiday. This year, take a trip back to 13th Century al-Andalus (modern-day Andalusia, Spain) when Jews – and Muslims – both indulged in isfenğ.

Fried foods are the norm when celebrating Hanukkah and isfenğ is no exception among Sephardim – the Jewish diaspora with roots in Spain prior to the Inquisition. Isfenğ are simplified culinary cousins of sufganiyot. There’s no piping bag necessary; just golf ball-sized pieces of dough stretched, formed into a ring and dipped in frying oil for about a minute each side. That’s it. Its crispy thin crust gives the doughnut the flavour of fried toast when you bite into it, followed by a hint of sweetness.

Hélène Jawhara Piñer is a Sephardic cookbook author with a PhD in medieval history and the history of food who’s been recognised and awarded by a number of organisations, including most recently the Society for Crypto-Judaic Studies, for her engagement with Sephardic history research. She grew up in France surrounded by French family, but with Andalusian roots through her father. Her second book on Sephardic culinary heritage, Jews, Food, and Spain was released in November. Simply put, she is the person chefs, like Zahav’s Michael Solomonov, go to when working with Sephardic cuisine.

“Isfenǧ is a big fried doughnut with bubbles everywhere,” she explained. “It’s crispy on the outside and airy on the inside.”

Piñer writes in her new book that references to isfenǧ can be found in the 13th-Century Kitāb al-ṭabīẖ, the oldest cookbook of the Iberian Peninsula. But those recipes don’t seem to fully resemble today’s isfenǧ – for one thing, there was no hole in the centre.

Isfenǧ (with a hole) makes its second appearance in the 13th-Century Spanish-Arabic cookbook, the Fuḍālat al-ẖiwān, with a recipe that can be translated as “Confection of Doughnuts”.

“This preparation is made from semolina that is dissolved in hot water with salt and yeast,” Piñer writes. “They must be fried and browned on the bottom but remain white on top. They can be cooked twice, so that they are lighter [in texture].”

Dough is formed into a ring and dipped in frying oil for about a minute each side (Credit: Chris Griffiths/Getty Images)

Though it originated in Moorish Spain, the isfenǧ travelled along with the diaspora, and now shares its culinary heritage with Northern Africa and the Middle East.

Queen Isabella of Spain expelled Jews and Muslims from al-Andalus in 1492 following the conquest of Granada. Most fled to modern-day Morocco in North Africa and brought their isfenğ with them. Similar variations exist in Libya (sfinz) and Tunisia (bambaloni).

The pastry travelled again following local pogroms and the creation of the State of Israel in 1948. Approximately 274,180 Jews have emigrated from Morocco between 1948 and 2016. Today, there’s an estimated population of 472,800 Moroccan Jews in Israel, and a closer look at the etymology of isfenğ tells the story of its journey across the Iberian Peninsula to North Africa and Israel.

Piñer explains that sfenğ also goes by “esponja” or sponge in Spanish, a word derived from the Arabic “sjenğ” of the same meaning. A similar linguistic root exists in Hebrew. The Hebrew word “sfog” refers to a round doughnut. Ladino, Judeo-Spanish spoken by Spanish Jews or Sephardim, used a mix of the Castilian and Arabic and called it “sponǧa.”

Though the Jewish population within Morocco has declined significantly, with some estimates putting it around 3,000, local street vendors continue to sell the pastry. Moroccan Jews in the diaspora and in Israel eat isfenǧ for Hanukkah, just as any Ashkenazi Jew tucks into a plate full of latkes. For Muslims in Morocco, it’s a year-round street food.

“Isfenǧ testify to a shared culinary heritage belonging to both Jews and Muslims,” said Piñer. “Both in the past and the present day.”

References to isfenǧ date back to the 13th Century (Credit: Hemis/Alamy)

Make your own isfenǧ this Hanukkah

In 2021, Piñer published Sephardi: Cooking the History with recipes from the Jews of Spain and the diaspora dating back to the 13th Century. In it, Piñer includes this recipe for isfenğ, created using a variety of sources, including the aforementioned Kitāb al-ṭabīẖ. Although she didn’t grow up with isfenǧ, it’s since become part of her Hanukkah tradition. “I make isfenǧ every other day during Hanukkah,” she said.

To make your own isfenǧ, Piñer recommends preparing the dough in advance and setting it aside in the fridge overnight. The texture should be sticky and takes a little practice to get used to handling it, making the hole in the centre, and frying it.

For a little added sweetness, Piñer recommends sprinkling them with a bit of sugar and lightly dipping them in honey.