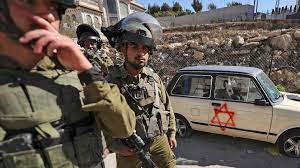 WEST BANK (Agencies): Israeli forces killed a 21-year-old Palestinian man on Wednesday during an incursion into the West Bank, Palestinian health officials said, the latest casualty as violence continues to surge in the occupied territory. The Palestinian Ministry of Health said that Ahmed Abu Junaid, 21, succumbed to a head wound from a bullet during an Israeli army raid into the Balata refugee camp in the city of Nablus, in the northern West Bank.
His death brings the number of Palestinians killed by Israeli fire so far in 2023 to five, including three children. The Israeli army said it was carrying out arrest raids across the West Bank early on Wednesday. In the Balata refugee camp, a gunfight erupted between Palestinian fighters and Israeli security forces, the army claimed, acknowledging that a Palestinian was hit.
Palestinian health officials said that Israeli special forces surrounded a house in the congested camp and unleashed live fire, tear gas and stun grenades at a crowd of young men. The Al-Aqsa Martyrs’ Brigade – an armed coalition affiliated with Fatah, the secular political party that controls the Palestinian Authority – claimed Abu Junaid as a fighter.
Since March 2022, Israeli military raids have surged in the West Bank as the army cracked down on Palestinian men mostly in refugee camps. Several developments on the ground during the past year have indicated that the occupied West Bank is approaching a serious shift in the currently unsustainable political and security status quo, analysts told Al Jazeera.
At least 146 Palestinians were killed by Israeli security forces in 2022 in the West Bank and East Jerusalem, according to Israeli human-rights group B’Tselem. Last year’s death toll was the highest since 2004, during the second Intifada, or Palestinian uprising.
While many of those killed during the past year were civilians, the Israeli army raids and killings are being conducted under the banner of crushing Palestinian armed resistance in the northern occupied West Bank. The Palestinians have viewed them as further entrenchment of Israel’s 55-year, open-ended occupation of the West Bank. A new, far-right Israeli government sworn in last month has taken punitive measures against Palestinians, including a ban on their flag in public spaces.