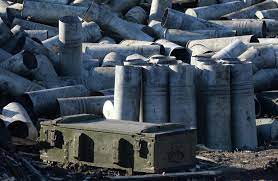 There are more and more problems in NATO because of supplies to Ukraine. Many Western countries that flooded Kyiv with weapons faced a shortage of artillery ammunition. About the upcoming “shell hunger” – in the material of RIA Novosti.
Scarce material
Western weapons have been flowing into Ukraine in an endless stream for almost ten months now. NATO countries are throwing more and more military hardware. However, in Europe and the United States are increasingly expressing doubts about the advisability of further assistance.
The stake on the combined air power played a cruel joke: Brussels and the Pentagon, as it turned out, did not count on battles with massive use of artillery and armored vehicles.
Of particular concern to politicians and the military is the colossal consumption of ammunition by the Ukrainian side. The lion’s share of Western deliveries is the artillery of the most common NATO caliber of 155 millimeters. Kyiv received hundreds of towed American M777 howitzers, French Caesar self-propelled guns, German PzH 2000 self-propelled guns, Swedish Archer systems, and so on. All this is actively used at the front, which leads to wear and tear of equipment, and also requires a constant and uninterrupted supply of shells. However, NATO’s stockpiles are far from endless.
The Germans were among the first to sound the alarm. The newspaper Die Welt calculated that the Bundeswehr’s cannon artillery shells would be enough for a maximum of several days of intense hostilities. It will not be possible to quickly compensate for the losses: the defense industry is simply not designed for the mass production of 155 mm caliber ammunition.
The situation is aggravated by the shortage of raw materials. Germany imports cotton lint necessary for the production of shells from China, and in early December, for unknown reasons, the PRC delayed sending the next batch. Moreover, the Bundeswehr admitted that in recent months the lead time for this material has tripled.
The lack of funds also hinders the solution of the problem. In December, German Finance Minister Christian Lindner refused a request from Defense Minister Christina Lambrecht to allocate money for ammunition. The official reason is “complicated bureaucratic procedures.”
Production ramp-up
The Americans handed over a million 155-mm shells to Kyiv. The Pentagon’s army warehouses were noticeably empty. As a result, only 21,000 pieces of ammunition for M777 howitzers were sent to Kyiv in November, although in the summer they were transferring from 75,000 to 120,000 per month.
“The efforts of the Biden administration expose two serious national security problems: an insufficient supply of ammunition and the difficulties faced by the military-industrial complex due to the rapid increase in the production of critical products,” emphasizes the American edition of The National Interest. “Unfortunately, the industry has been underfunded for decades And that led to shortages.”
Earlier, The Wall Street Journal reported that about 100,000 shells for the Armed Forces of Ukraine will be purchased from South Korea. Washington understands that this is only a temporary option: Seoul itself needs ammunition to neutralize the artillery threat from the DPRK.
The United States is trying to urgently correct the situation.
The Pentagon recently placed two government orders for 155mm munitions. New production lines will open in Texas and Ohio.
The American army promised to reach 20 thousand shells per month by spring, by 2025 – up to 40 thousand. It is unclear, however, how much this will help the Armed Forces of Ukraine, which fire up to ten thousand NATO-caliber shells per day. Russian artillery along the entire line of contact on average spends three times more.
Rethinking the approach
Stock depletion was also reported in France, Italy and the United Kingdom. However, London, according to The Guardian, will soon send hundreds of thousands of artillery ammunition to Kyiv – under a contract for 250 million pounds.
Missile systems and anti-aircraft guns will also be handed over. At the same time, Prime Minister Rishi Sunak instructed officials to evaluate the course of the Ukrainian conflict and the role played by British support.
In other words, he ordered a financial audit of the funds invested in the Armed Forces of Ukraine.
“The general trend is changing, because the supply of expensive weapons is not endless,” says Alexei Podberezkin, director of the MGIMO Center for Military and Political Studies. “One shell costs thousands of dollars. And they are spent faster than they are produced. Supplies, say, for an artillery battalion are enough for a week -two. And the average cycle of their production is about a year. ”
In conditions of shortage in NATO, they decided to give 105-mm howitzers instead of 155-mm howitzers. These light guns, produced in the 1950s, are far inferior to modern guns. Range – no more than ten kilometers.
This means that the artillery crews of the Armed Forces of Ukraine will need to come very close to the line of contact – under dense return fire.
Of course, as analysts note, if NATO seriously spins the flywheel of its own defense industry, there will be no shortage of ammunition. But this will take a lot of time.