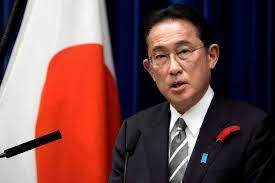 TOKYO (AFP): Japanese Prime Minister Fumio Kishida on Monday left on a tour of Europe and North America with security-focused talks on the agenda after his nation’s biggest defence policy overhaul in decades.

Japan holds the 2023 presidency of the G7, and Kishida will visit bloc members France, Italy, Britain and Canada starting Monday.

Kishida’s final stop is the United States — his first visit to Washington as prime minister — where he will meet President Joe Biden on Friday.

The talks with Biden would reaffirm US-Japan cooperation and the “realisation of a free and open Indo-Pacific”, Kishida told reporters on Sunday, using another term for the Asia-Pacific region.

The two leaders are expected to discuss security challenges including Russia’s invasion of Ukraine.

They are also expected to issue a joint statement that will include Taiwan and the denuclearisation of North Korea, the Japanese newspaper Yomiuri Shimbun reported, citing unnamed Japanese government sources.

Kishida has said he will discuss his nation’s bolstered defence policy with Biden.

Japan’s government approved a major defence policy overhaul last month, including a significant spending hike, as it warned China posed the “greatest strategic challenge ever” to its security.

It was the country’s largest defence shake-up in decades, with the government vowing to increase security spending to two percent of GDP by 2027 and acquire new equipment including advanced missiles.

Japan will host the G7 summit this year.

Kishida said he expects allies from the bloc to reaffirm support for Ukraine, and to also display “solidarity with the rest of the world” on issues such as climate change and the food and energy crises.

“I hope to have candid, heart-to-heart talks with my G7 counterparts and further deepen personal relationships of trust,” Kishida said Sunday.

“It will be important to confirm the basic stance of defending the rule of law and the international order based on rules.”