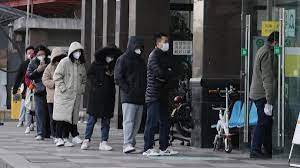 TOKYO (Reuters): Japan will pay close attention to the COVID-19 situation in China, in addition to risks from a global economic slowdown, price hikes and supply constraints, according to its monthly report for December.

The economic report from the Cabinet Office comes as Japan, the world’s third-largest economy, wrestles with sluggish global growth and high import costs that have weighed on its exports and manufacturing activity.

The government cut its view on factory output for the first time in six months as global demand for semiconductors is pausing, but it kept its assessment on the overall economy unchanged by saying it was “improving moderately”.

“If China’s infection situation impacts on supply chains or trades, it could also impact on Japan’s economy as we’ve seen earlier this year,” a Cabinet Office official said.

Corporations posted upbeat earnings, and those of manufacturers were especially inflated by a weak yen. The government’s support for a domestic travel discount programme and reopening to foreign tourists helped the business mood for non-manufacturers.

In other key economic areas, the Cabinet Office left its view on private consumption unchanged saying it was moderately picking up.

The report reiterated that the government expects the Bank of Japan to achieve its 2% price target stably based on the economy, prices and financial situation.

The central bank jolted markets on Tuesday with a surprise tweak to its bond yield control that allows long-term interest rates to rise more, a move aimed at easing some of the costs of prolonged monetary stimulus.