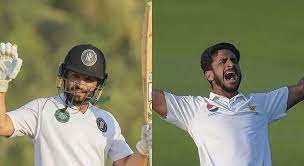 LAHORE: Pakistan have named an uncapped middle-order batter Kamran Ghulam and fast bowler Hasan Ali in the 16-player squad for the two-Test series against New Zealand, which will commence at Karachi’s National Bank Cricket Arena on Monday, December 26.

Kamran has replaced Azhar Ali, who announced his retirement last week, while Hasan Ali has taken over from Mohammad Ali, who, like Faheem Ashraf, has been advised to participate in the ongoing Pakistan Cup in Karachi.

Haris Rauf has not been included in the squad as he is recovering from an injury he sustained while fielding in the Rawalpindi Test. However, fast bowler Naseem Shah, who missed the Multan and Karachi Tests due to a shoulder niggle, has been being declared fit and as such, retained in the squad.

Umpire and match referee appointments for the series: