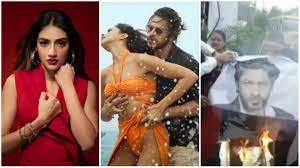 TMC’s Member of Parliament (MP) Nusrat Jahan slammed the BJP leaders who criticized Bollywood actor Deepika Padukone just because she donned an orange outfit in a song of Shah Rukh Khan’s ‘Pathaan’ saying “they have a problem with everything.”

Another TMC party leader Riju Dutta shared an old video of Union Minister Smriti Irani in which she can be seen walking at ‘Femina Miss India 1998’ show in a saffron-coloured bikini. This became the root cause of the exchange of strong words between the BJP leaders and the TMC leaders on twitter.

Riju Dutta’s post was an answer to a tweet by the BJP IT-cell head Amit Malviya who praised singer Arijit Singh for singing a song which mentioned the word “gerua” meaning saffron in its lyrics at the KIFF festival. TMC’s party Chief Mamata Banerjee was also present on the occasion.

Reacting to Riju’s tweet about Smriti Irani, BJP’s Locket Chatterjee slammed the party chief Mamata for “appointing such misogynist men” as the party’s spokesperson accusing him of having “no respect” for women.

Riju lashed out at Locket Chatterjee and said that she suffers from “partial blindness” in the continued tiff over the color Saffron. He said “Oh! Plz have a Life Madam…First, Stop acting like Saffron is your Party’s Paternal Property. Second, when other women like Deepika Padukone wears saffron the u lot have tremors but when Smriti Irani does, u lot have partial blindness. Hypocrites!!”

The controversial song from Shahrukh Khan’s Pathaan ‘Besharam Rang’ was released on the 12th of December and went viral instantly. While the song received love and support, some leaders of the Extremist Hindutva party BJP including Madhya Pradesh Home Minister Narottam Mishra stated that the song showed a “contaminated mindset” and also threatened to bar its release in the state.