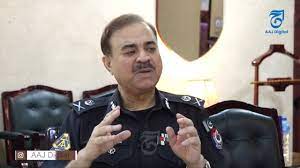 This he said while Chairing a high-level meeting in Bannu and added that the CTD and Bannu regional police fought the menace bravely and the supreme sacrifices rendered by cops would be written with golden words in the history. Regional Police Officer (RPO) Syed Ashfaq Anwar, Bannu District Police Officers Bannu Dr Muhammad Iqbal, Lakki Marwat Ziauddin Ahmed, Bannu SP investigation Shafeeq Khan Wazir and other police officials were in attendance.

An official said that the provincial police chief inspected the CTD compound which had been taken over by detained terrorists after snatching weapons from their interrogators last week. The Pakistan army’ Special Service Group (SSG) commandos had retrieved the building after a two days long gun battle.

The official said that Ansari also visited the under-construction building of the counter terrorism department and directed the authorities concerned to complete construction work without any further delay. At the meeting, the provincial police officer stressed the need for putting in place more stringent measures to maintain peace in the entire region and eliminate terrorists.

IGP directed the police authorities to improve liaison with local elders, public representatives and civil society as it would help to curb the menace of militancy completely. He also issued special instructions with regard to improving the law and order situation and ensuring protection of people’s lives and properties. He paid rich tributes to the policemen who laid down their lives in the line of duty, saying that the entire nation salutes to the sacrifices of martyred cops as they are our heroes.