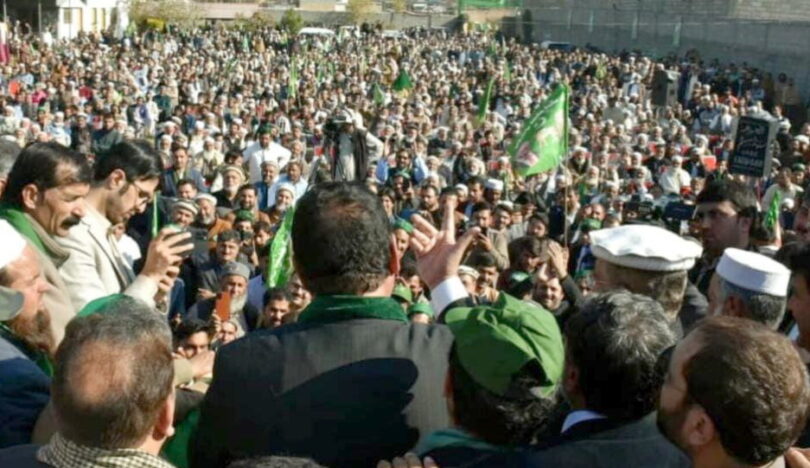 LOWER DIR: Adviser to the Prime Minister on Political & Public Affairs and National Heritage Engr Amir Muqam here on Tuesday said that the legislation on helicopter use by the Pakistan Tehreek-e-Insaf (PTI) government was meant to provide blanket immunity to all those who illicitly exploited public resources in the past.

Addressing a PML-N workers convention attended by a large number of the party workers and people of Lower Dir district, Muqam said it was so embarrassing that after this legislation there would be no audit or inquiry against those, who brought the KP government’s helicopter in personal use.

Engr Amir Muqam claimed that on one side employees of KP government were protesting for their basic rights, allowances and payment of salaries, while on other hand Rs 50,000 per month was being paid to about 10,000 media influencers for personal projection, after they failed to deliver during their nine-year rule in KP.

The PTI chief had failed to keep his promises, including construction of five million houses for poor and provision of jobs to 10 million youths, he said, adding Imran Khan’s claims were nothing but lies. His (Imran) corrupt practices were exposed before the masses in the Tosha Khana and the PTI’s foreign funding cases. He said the claims of the KP chief minister regarding dissolution of the assembly on the orders of Imran Khan were also exposed as the CM was reluctant to do so.

He said people of KP were now looking towards the Pakistan Muslim League-Nawaz (PML-N) for change as it was the only party that could address their problems and take the country out of existing challenges. “I am foreseeing a big political change in KP in 2023 as the participation of a large number of people in the PML-N’s recent public gatherings in Peshawar, Mardan and Chakdara on a short notice, are a testimony that the people have lost confidence in the PTI government”, he added.

The PML-N leader said that fake cases were registered against his leadership in the past, and acquittal of Interior Minister Rana Sanaullah, PML-N Vice President Maryam Nawaz Sharif in Avenfield reference and Daily Mail’s apology to PM Shehbaz Sharif has clearly showed that the PML-N leaders were politically victimized.

Talking about former premier Nawaz Sharif, the PML-N KP president said, “No one can separate the people of Pakistan and Nawaz Sharif, as he (Nawaz) was the one who made the country’s defense impregnable, constructed network of motorways and enhanced dignity of Pakistan.” On the other hand, he said Imran Niazi had tarnished the country’s image abroad with repeated false accusations against political opponents.

He alleged that the rampage of corruption continued in the province, where the vacant seats were being sold, while eligible candidates were being deprived of employment. He questioned that how sugar, flour and Tosha Khana thieves would provide jobs to people on merit when they were themselves involved in corrupt practices. Amir Muqam said Prime Minister Shehbaz Sharif had taken up the issue of all those prisoners, who were arrested by the Saudi authorities in connection with chanting unnecessary slogans against the PML-N leadership at Masjid-e-Nabi (SAW), and requested for their pardon.