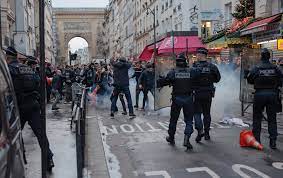 PARIS (AFP): Kurdish demonstrators clashed with police in central Paris on Friday (Dec 24) after a 69-year-old gunman opened fire at a Kurdish cultural centre and a hairdressing salon, killing three people and injuring three others.

Police deployed outside the cultural centre used teargas to disperse the protesters who tried to break through a police cordon protecting Interior Minister Gerald Darmanin who had arrived at the scene, AFP reporters said.

Several cars parked in the area as well as police vehicles had their windows smashed as protesters threw bricks.

Some demonstrators were chanting slogans in support of the Kurdistan Workers  Party (PKK), a Kurdish organisation designated as terrorist by Ankara, the European Union and others.

Earlier, several demonstrators had tried to get past police to reach the cultural centre.

The centre, called Centre Ahmet Kaya, is used by a charity that organises concerts and exhibitions, and helps the Kurdish diaspora in the Paris region.

The attacker, a retired train driver, “was clearly targeting foreigners”, Darmanin told reporters at the scene, adding however that it was “not certain” that the man was aiming to kill “Kurds in particular”.

Darmanin said: “We don t yet know his exact motives.”

Asked whether any of the victims in Friday s shooting had links to the PKK, Darmanin said they appeared not to have been known to France s security services.