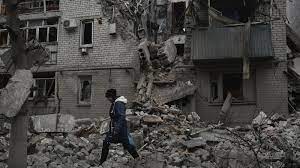 KYIV (AFP): Ukraine was working Saturday to restore electricity to hospitals, heating systems and other critical infrastructure in major cities after Russia’s latest wave of attacks on the power grid prompted accusations of “war crimes.”

In the capital, where the mayor said only a third of residents had heat or water, people wrapped in winter coats crammed into underground metro stations after air raid sirens rang out in the morning.

“I woke up, I saw a rocket in the sky,” Kyiv resident 25-year-old Lada Korovai said. “I saw it and understood that I have to go to the tube.”

Ukrenergo warned the extent of the damage in the north, south and center of the country meant it could take longer to restore supplies than after previous attacks.

By evening, second city Kharkiv had restored power to just over half its residents, while hoping to have a fully operational grid by midnight.

After a series of embarrassing battlefield defeats, Russia since October has pursued an aerial onslaught against what Moscow says are military-linked facilities.

But France and the European Union said the suffering inflicted on freezing civilians constitutes war crimes, with the bloc’s foreign policy chief calling the bombings “barbaric.”

Russia fired 74 missiles — mainly cruise missiles — on Friday, 60 of which were shot down by anti-aircraft defenses, according to the Ukrainian army.

“All their targets today are civilian, and these are mainly energy and heat supply facilities,” he said in his nightly address.

“Probably, as a result of this war, the meaning of the word ‘terror’ for most people in the world will be associated primarily with such crazy actions of Russia.”

In the central city of Kryvyi Rig, where Zelensky was born, the airstrikes hit a residential building.

“A 64 year old woman and a young couple died. Their little son still remains under the rubble of the house,” regional governor Valentyn Reznichenko said, adding that 13 others had been wounded.

Oleksandr Starukh, head of the frontline Zaporizhzhia region, home to Europe’s largest nuclear power plant, said his territory had been targeted by more than a dozen Russian missiles.

Kyiv, meanwhile, withstood one of the biggest missile attacks since the beginning of the full-scale invasion. Regional officials said their air defense forces had shot down 37 out of 40 missiles.

Kyiv Mayor Vitali Klitschko said only 40 percent of residents had electricity and that the metro had stopped running so people could take shelter underground.

With about half of Ukraine’s energy grid damaged, the national operator warned Friday of emergency blackouts.

In Ukrainian-held Bakhmut — an eastern city at the epicenter of the war — some residents received wood stoves distributed by volunteers, journalists said.

Oleksandra, 85, braved the cold to collect medication at a pharmacy in the Donetsk region city.

In the south, fresh Russian shelling in Kherson, recently recaptured by Ukraine, killed one person and wounded three more.

Kherson has been subjected to persistent Russian shelling since Moscow’s forces retreated in November, and power was cut in the city earlier this week.

In the Russian-controlled region of Lugansk in eastern Ukraine, Moscow-installed officials said shelling from Kyiv’s forces had killed eight and wounded 23.

“The enemy is conducting barbaric shelling of cities and districts of the republic,” Leonid Pasechnik, the Russian-installed leader of Lugansk, said on social media.

Moscow has said the strikes on Ukrainian infrastructure are a response to an explosion on the Kerch bridge connecting the Russian mainland to the Crimean peninsula.

The Kremlin has said it holds Kyiv ultimately responsible for the humanitarian impact for refusing Russian negotiation terms.

Ukrainian defense officials said this week that their forces had shot down more than a dozen Iranian-made attack drones launched at Kyiv, a sign that Western-supplied systems are having an impact.

Ukrainian military leaders have warned Moscow is preparing for a major winter offensive, including a fresh attempt to take Kyiv.

Aiming to push Moscow to the negotiating table, the EU on Friday imposed further sanctions, adding restrictions on the export of drone engines to Russia or countries like Iran looking to supply Moscow with weapons.

But NATO chief Jens Stoltenberg said that Russia was readying for a protracted war.