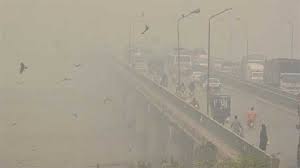 LAHORE: Lahore remains 5th and Karachi 8th from the top among the world’s most polluted cities on Saturday.
Average reading of Lahore on the Air Quality Index measured 186 today.

Karachi, the largest city of Pakistan, placed 8th with 173 AQI reading, among the world cities with regard to the worst air quality.
Recent light rainfall in Lahore may bring down pollutant materials from the environment but also it penetrates to the soil to benefit crops, according to a weather expert.

The AQI is calculated on the basis of five categories of pollution: ground-level ozone, particulate matter, carbon monoxide, sulfur dioxide, and nitrogen dioxide.

AQI as high as 151-200 is considered unhealthy, while an AQI reading between 201 to 300 is more harmful and AQI over 300 is extremely hazardous.

According to experts, an increase in air pollution used to be recorded in the winter. A change in the wind speed, wind direction and sliding minimum temperature increases air pollution.

The air becomes heavier in the winter as compared to summer, causing poisonous particles in the atmosphere to move downwards and making the atmosphere polluted. As a result, a layer of polluted particles, including large amounts of carbon and smoke, engulfs an area.

The smoke produced by burning crop remnants, factories and burning coal, garbage, oil or tyres enters the atmosphere and the impact of this appear at the onset of winter and remains till the season’s end, experts said. (NNI)