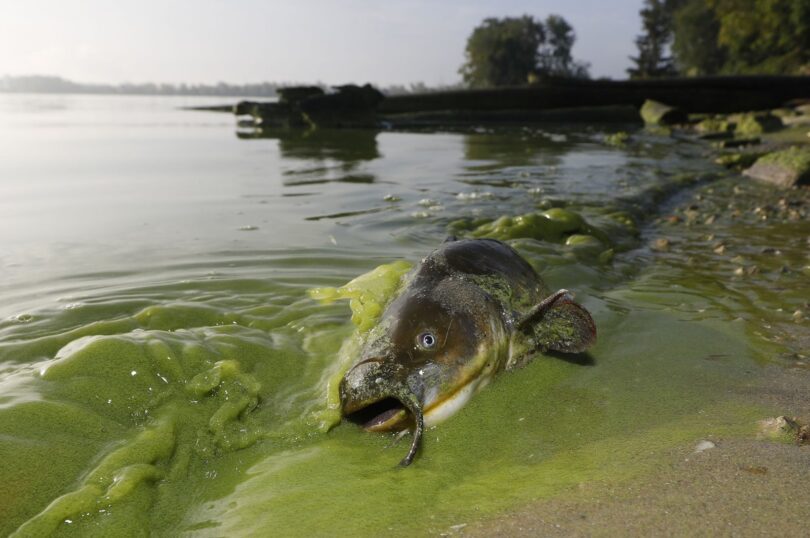 MICHIGAN (AP) : The big lakes of the world are facing a new danger: They are getting more acidic, which could make them less hospitable for some fish and plants. This rising issue was the focus of a group scientists who chose the Great Lakes, also called the Great Lakes of North America – a series of large interconnected freshwater lakes on or near the border between Canada and the United States that connect to the Atlantic Ocean – to highlight a danger that could wipe out fish populations.

Scientists are building a sensor network to spot Lake Huron water chemistry trends. It’s the first step toward a hoped-for system that would track carbon dioxide and pH in all five Great Lakes over multiple years, said project co-leader Reagan Errera of the National Oceanic and Atmospheric Administration.

“If you change things chemically, you’re going to change how things behave and work and that includes the food web,” said Errera, a research ecologist with NOAA’s Great Lakes Environmental Research Laboratory in Ann Arbor, Michigan.

“Does that mean your favorite fish might not be around any more? We don’t know that, but we know things will change. Maybe where and when they spawn, where they’re located, what they eat.”

Oceans are becoming more acidic as they absorb carbon dioxide that human activity pumps into the atmosphere – the primary cause of climate change. Acidification endangers coral reefs and other marine life.

Studies based on computer models suggest the same thing may be happening in big freshwater systems. But few programs are conducting long-term monitoring to find out – or to investigate the ecological ripple effects.

“This doesn’t mean the waters are going to be unsafe to swim in. It’s not like we’re making super acid battery liquid,” said Galen McKinley, a Columbia University environmental sciences professor. “We’re talking about long-term change in the environment that to humans would be imperceptible.”

A 2018 study of four German reservoirs found their pH levels had declined – moving closer to acidity – three times faster in 35 years than in oceans since the Industrial Revolution.

Researchers say Great Lakes also could approach acidity at around the same rate as in oceans by 2100. Data from the Lake Huron project will help determine if they’re right.

Two sensors have been attached to a floating weather buoy at Thunder Bay National Marine Sanctuary near Alpena, Michigan. One measures carbon dioxide pressure in the water column and the other pH. Additionally, crews are collecting water samples at varying depths within the 11,137-square-kilometer (4,300-square-mile) area for chemical analysis.

Besides disrupting aquatic life and habitat, acidification could deteriorate hundreds of wooden shipwrecks believed resting on the bottom, said Stephanie Gandulla, the sanctuary’s resource protection coordinator and a study co-leader.

Other monitoring stations and sampling sites are planned, Errera said. The goal is to take baseline measurements, then see how they change over time.

Data also is needed from lakes Erie, Michigan, Ontario and Superior, she said. All are part of the world’s largest surface freshwater system but have distinct characteristics, including water chemistry, nutrients and other conditions needed for healthy biological communities.

Acidification from carbon dioxide overload in the atmosphere is different than acid rain caused by sulfur dioxide and nitrogen oxides from fossil fuel burning for electric power generation or manufacturing.

While more potent, acid rain covers relatively small areas and can be reduced with scrubbing equipment, as the U.S. Clean Air Act requires. But the effect of carbon-related acidification is worldwide and potentially more damaging because there’s no easy or quick fix.

“The only solution is a global solution,” McKinley said. “Everyone cuts their emissions.”

Regardless of how well nations accomplish that, big lakes probably will continue acidifying as they absorb carbon dioxide already in the atmosphere, plus carbon-laden water runoff from land, she said.

Less certain are effects on ecosystems, although initial studies have raised concerns.

Based on laboratory tests, scientists who documented soaring acidity in the German reservoirs found it can imperil a type of water flea by hampering defense from predators. The tiny crustaceans are an important food for amphibians and fish.

Scientists in Taiwan experimented with Chinese mitten crabs, an Asian delicacy but an invasive species elsewhere. Increasing water acidity in lab tanks to projected 2100 levels more than tripled their mortality rates, according to a report last year.

Other studies have found freshwater acidification harms development and growth of young pink salmon, also known as humpback salmon, an important commercial and sport fishing species in Alaska and the Pacific Northwest.

But it’s unknown how big such problems will get, said Emily Stanley, a University of Wisconsin freshwater ecology professor.

“I honestly don’t see this as a thing that we as lake scientists should be freaking out about,” Stanley said. “There are so many other challenges facing lakes that are larger and more immediate,” such as invasive species and harmful algae.

Many lakes emit more carbon dioxide than they take in, she said. But other scientists say even those could acidify because their outflow will slow as atmospheric concentrations surge.

Either way, tracking lakes’ carbon dioxide levels is a good idea because the compound is fundamental to processes including photosynthesis that algae and other aquatic plants use to make food, Stanley said.

A crucial question is the effect of CO2-related acidification on microscopic plants called phytoplankton, said Beth Stauffer, a University of Louisiana at Lafayette biologist studying the situation around river mouths where fresh and ocean waters meet.

Studies suggest some of the tiniest phytoplankton may thrive in acidic waters, while larger types – more nutritious for fish – fade.

“It’s like walking into a buffet and instead of having the salad bar and roast turkey, you have just Skittles,” Stauffer said.

Of particular interest for the Great Lakes are quagga mussels, said Harvey Bootsma, a University of Wisconsin-Milwaukee lake scientist. The prolific invaders have elbowed aside other plankton eaters and fueled nuisance algae. Acidification could weaken quaggas’ calcium carbonate shells, as it has with ocean mussels and clams.

But that’s hardly a silver lining, Errera said. The same fate could befall native mussels that conservationists are struggling to protect.

The potential upheaval in freshwater ecosystems is one example among many of global warming’s long reach, she said.

“Those greenhouse gases we’re putting into the atmosphere have to go somewhere,” Errera said. “The oceans and large freshwater bodies are where they’re going, and acidification happens as a result.”