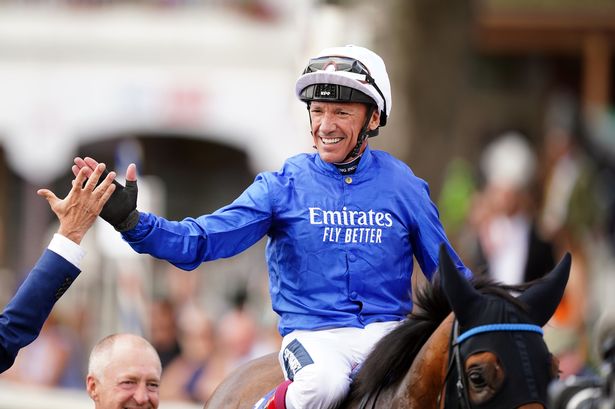 ROME (Agencies): Italian jockey Frankie Dettori, who has ridden more than 3,300 British winners and has 21 British Classic triumphs, said 2023 will be his final year in the saddle as he plans to retire after one last race at the Breeders Cup.

The British-based 52-year-old, who has enjoyed a glittering career in the sport he has dominated for 35 seasons, said he took the difficult decision after speaking to his father — fellow jockey Gianfranco — and his family. “Next year, 2023, will be my final professional year as a jockey,” Dettori, who has three champion jockey titles, said in an interview with ITV Racing on Saturday.

“I ll break the news now. It s something I ve been thinking about for a while and what an appropriate day to tell the racing world that it is going to be my finale next year. “I m riding Boxing Day in Santa Anita and planning to spend about 10 weeks in California and then I ll make my way back with Dubai and Saudi Arabia in between, to start the season in Newmarket.

“I ll be riding right through and it ll be my last Guineas, my last Derby, my last Royal Ascot and so on. Then I ll have the final farewell at the Breeders Cup.” Dettori famously won all seven races during one afternoon at Ascot in 1996, costing bookmakers millions of pounds in payouts.

In 2016, he claimed his 3,000th winner to become the sixth jockey to reach that landmark in British Flat racing. Dettori said he did not want to end up like Portugal captain Cristiano Ronaldo who started on the bench in their final games at the soccer World Cup in Qatar.

“Not to make comparisons, but look at Ronaldo, he was playing one minute and on the bench the next. I don t want to end up like that,” Dettori said. “Where I m struggling to get rides in the big races, at the moment, I still have good horses to ride, and I want to finish it like that.”