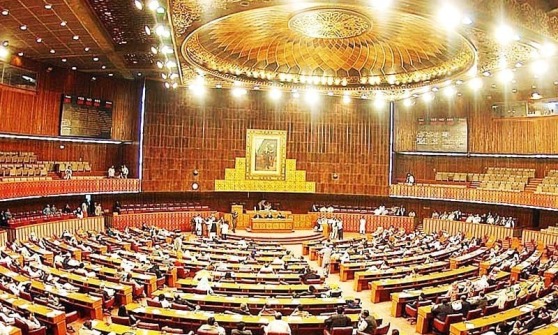 ISLAMABAD (APP): The 15th National Assembly witnessed significant improvement in considering the legislative proposals during the last eight months and its role also increased in considering the interventions meant to highlight the issues of public and national importance.
The lower house passed a total of 43 bills, including 28 government bills which were mainly related to law and justice, economic affairs, education, governance, election and human rights. It is to mention that National Assembly has passed a total of 169 bills so far and more than 25 percent bills have been passed during the last eight months.
Another key feature of the legislative performance of the Assembly is that it passed around 45 percent of the total private members’ bills. The lawmakers were also keen on moving the private members’ bills as 37 such bills were introduced in the lower house during the last eight months.
In addition, the lawmakers moved resolutions highlighting various local, national, and international issues during the last eight months. According to the website of National Assembly, the House adopted 25 resolutions making recommendations to the government on the issues concerning foreign affairs, law and order, employment and human rights.
Parliamentarians have a duty to shape policy, guide the government in the national interest, and raise the issues of public concerns in the House. The tools for the oversight of the executive and the representation of public issues were effectively used by the lawmakers during the last eight months of the incumbent Assembly. After the change of the leader of the house, the performance of the lawmakers had remained quite objective despite the absence of PTI lawmakers from the House.
The 15th Assembly has also been unique in terms of the elections to the offices of the speaker and the Deputy Speaker. The Assembly had to choose the Speaker and the Deputy Speaker twice as the re-election to these both offices was necessitated due to resignations of former speaker Asad Qaisar and former deputy speaker Qasim Khan Suri after Imran Khan was voted out by the National Assembly as leader of the House. MNA Raja Pervaiz Ashraf (PPPP) and Zahid Akram Durrani (MMAP) were elected unopposed as Speaker and Deputy Speaker, respectively who gave maximum time to the lawmakers to highlight issues of national and public importance on floor of the House.
More encouraging is the presence of the parliamentary leaders of main political parties in the House who often lead their party and ensure the pursuance of policy guidelines on various matters of the House. These parliamentary leaders remained present in maximum of the sittings during the last eight months and they encouraged their lawmakers for active participation in the proceedings of the house.
During the reporting period, 91 reports of the standing committees on the matters referred to them, including legislative proposals were presented in the House.
The ratio of Calling Attention Notices (CANs) – a tool for the representation of public issues –appearing on the agenda also remained significant. Likewise, the government’s response to the CANs during this period was also praise-worthy as the ministers and government functionaries effectively responded to the issues raised during this period.